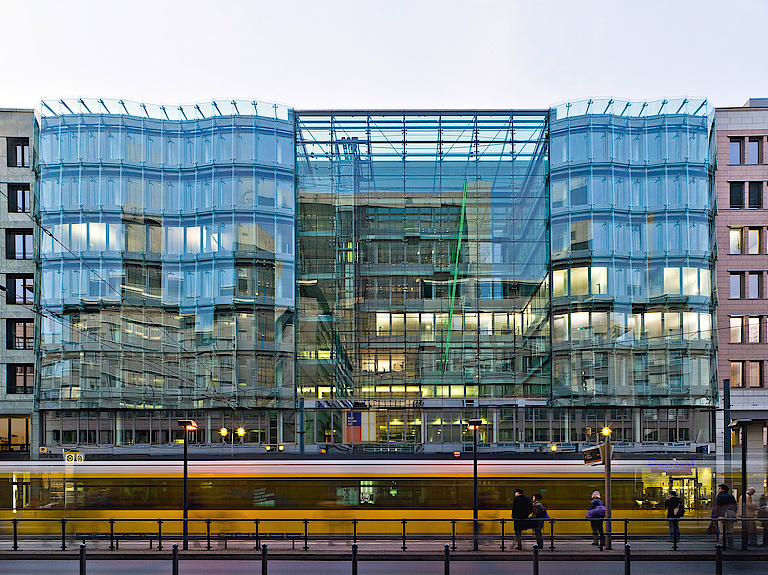 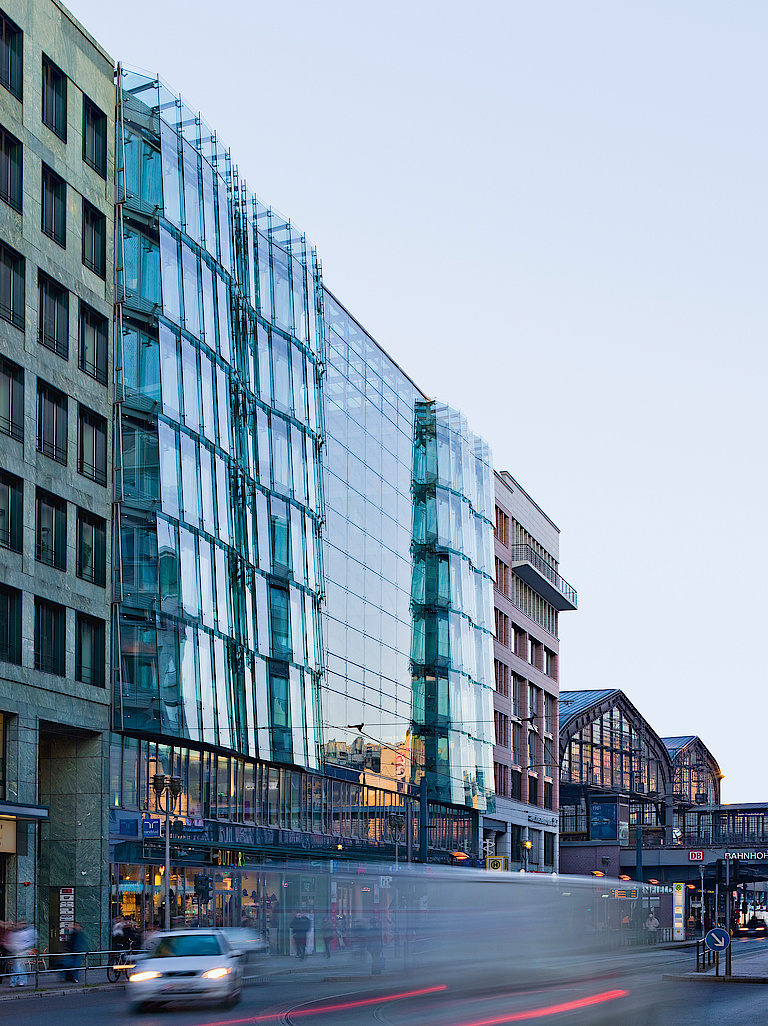 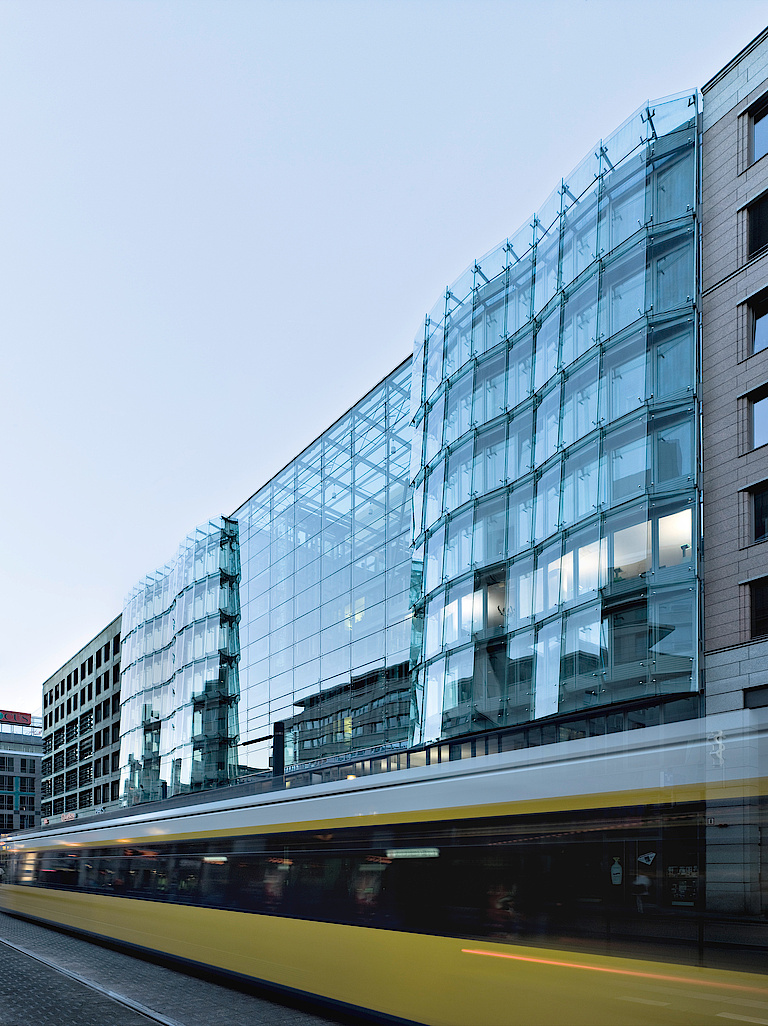 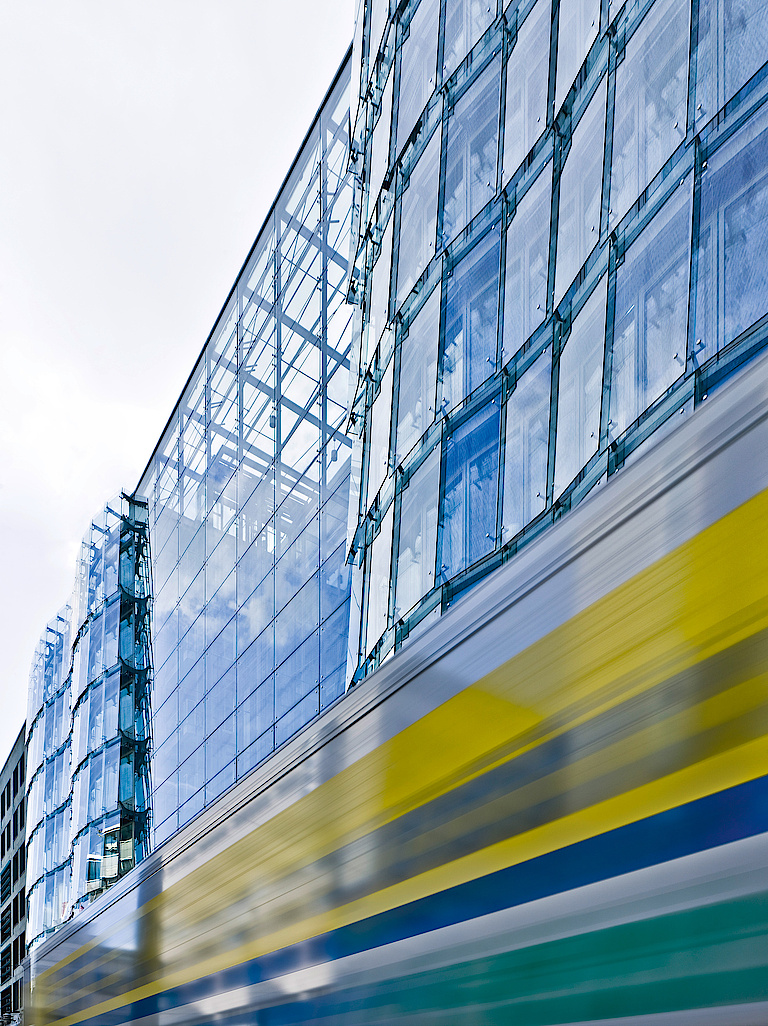 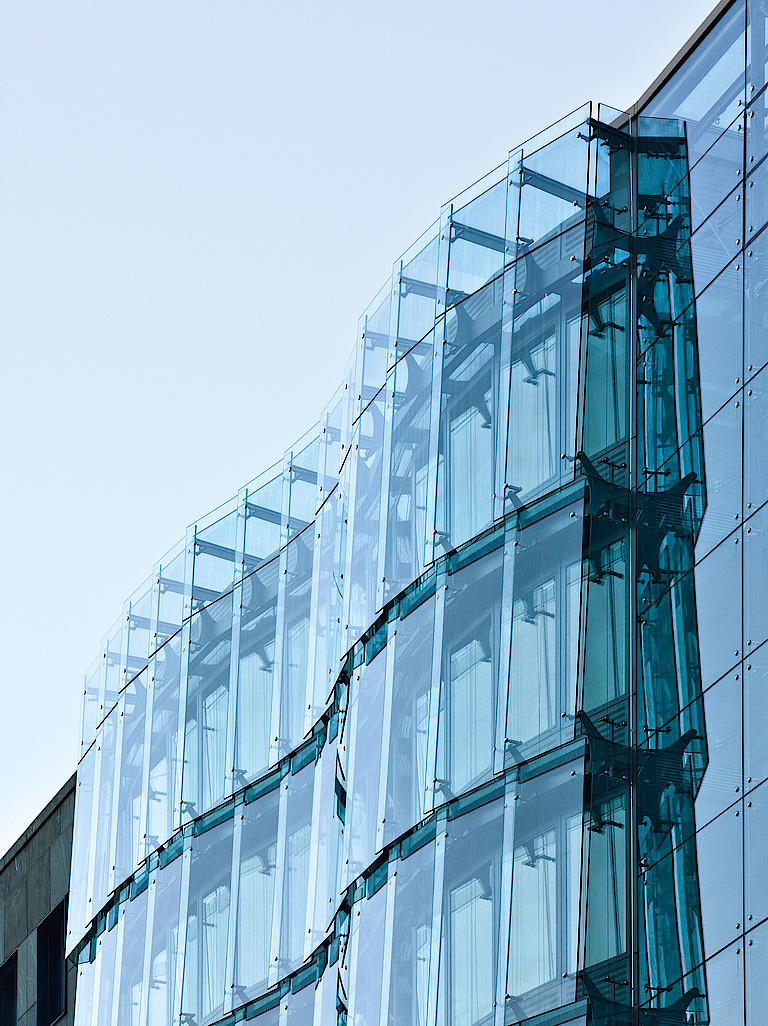 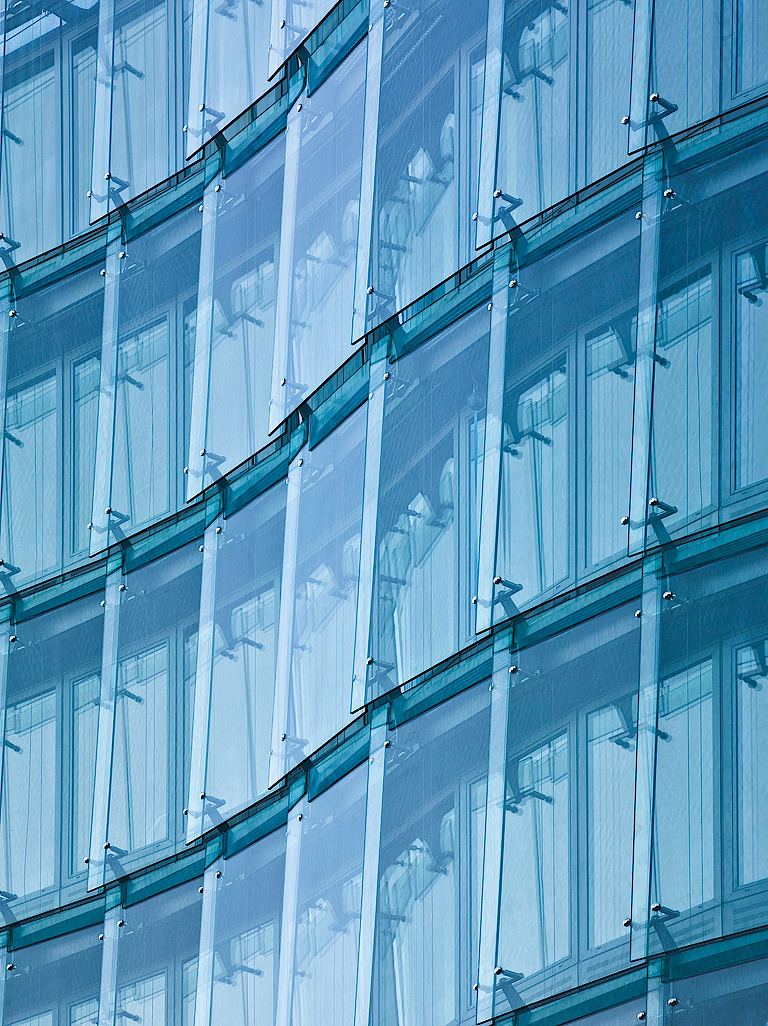 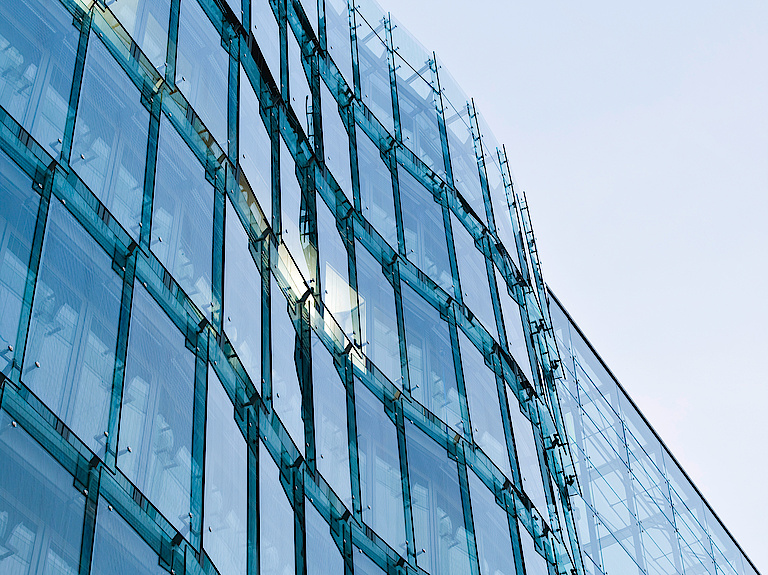 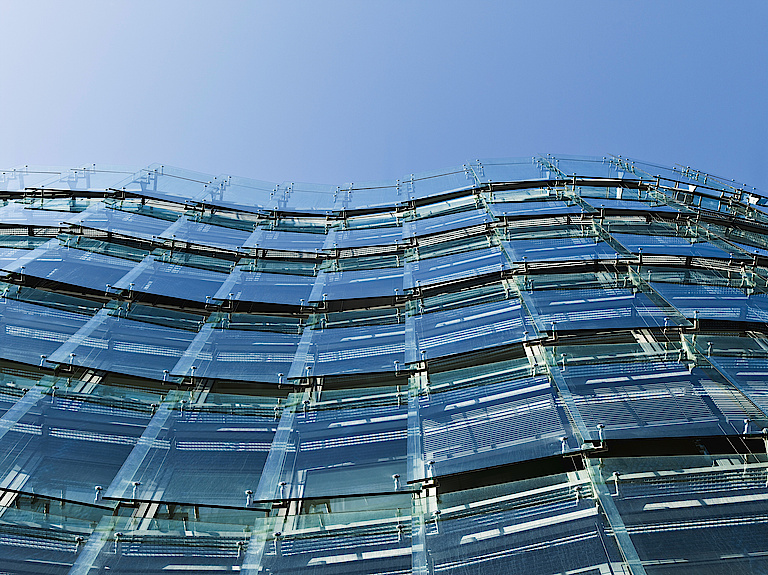 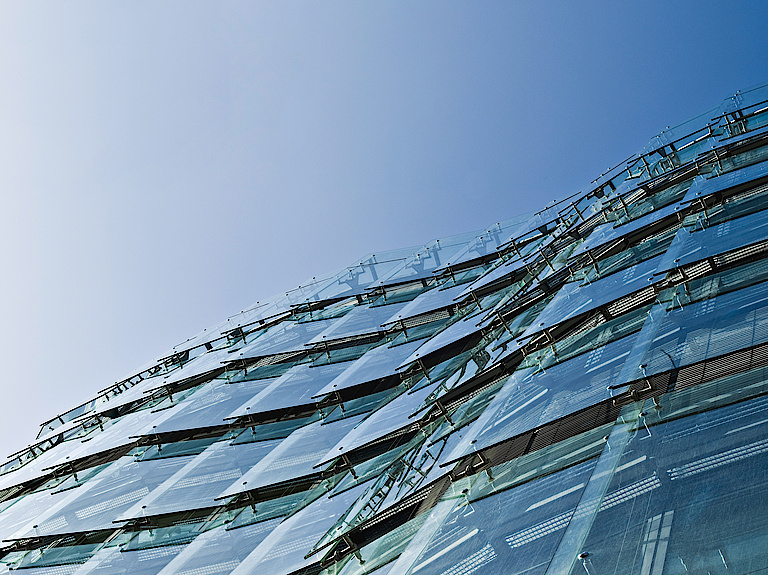 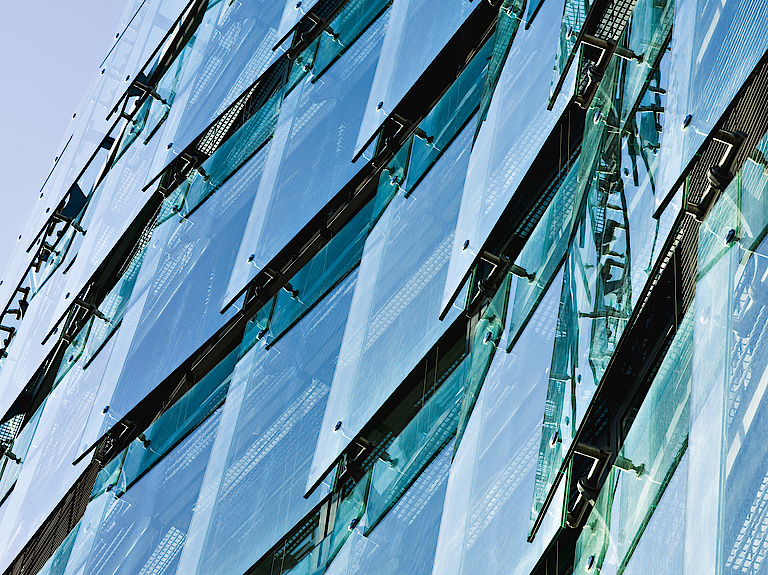 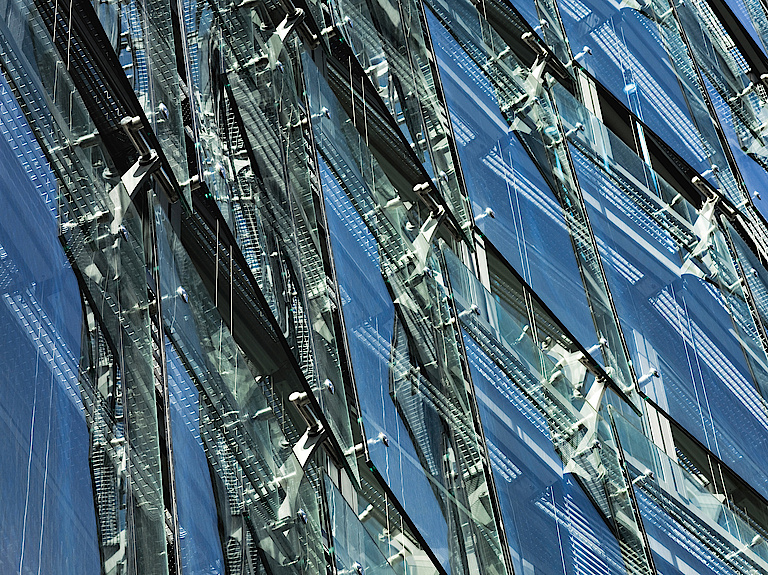 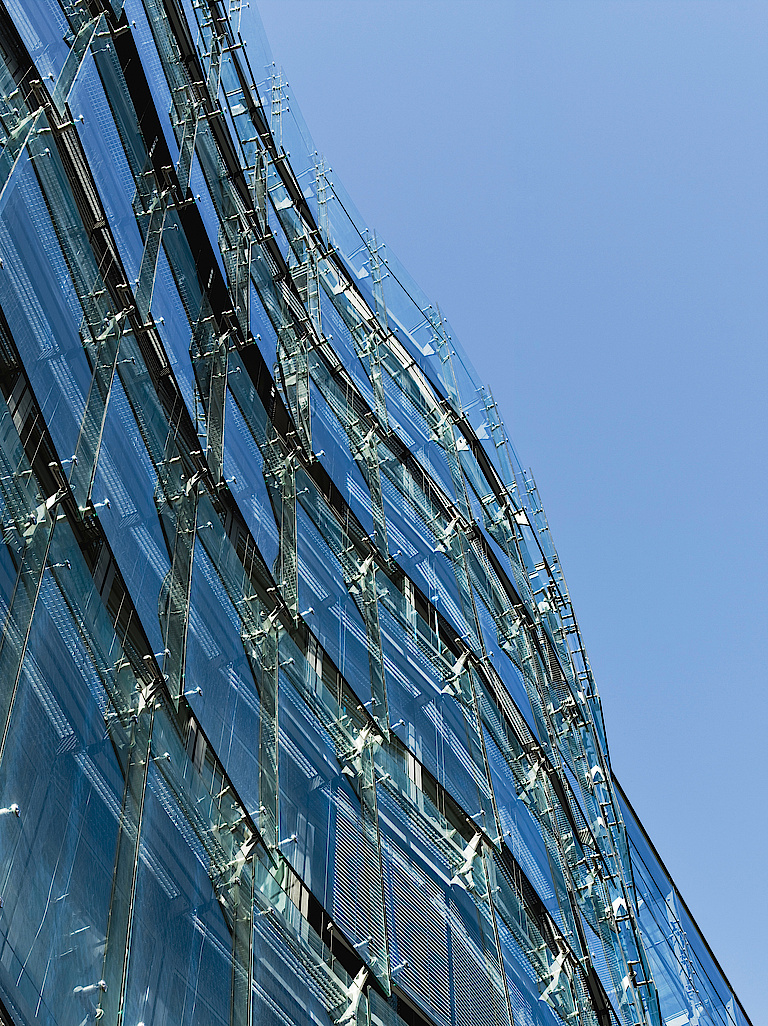 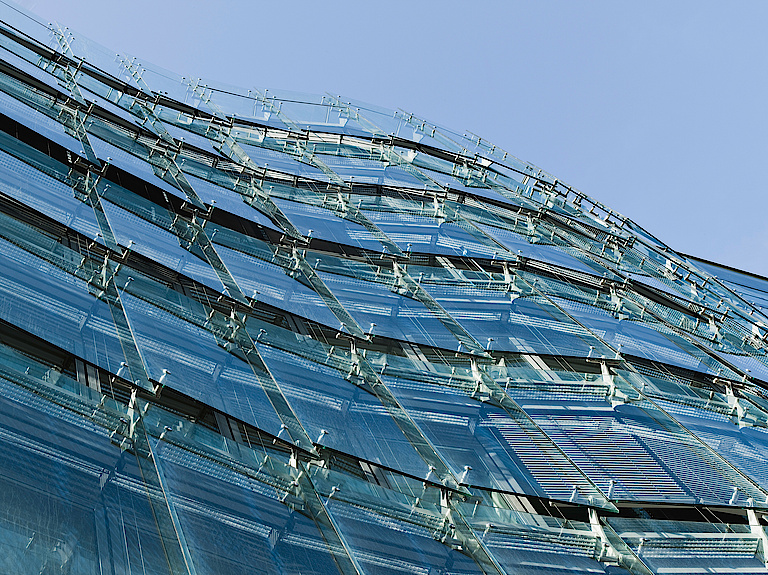 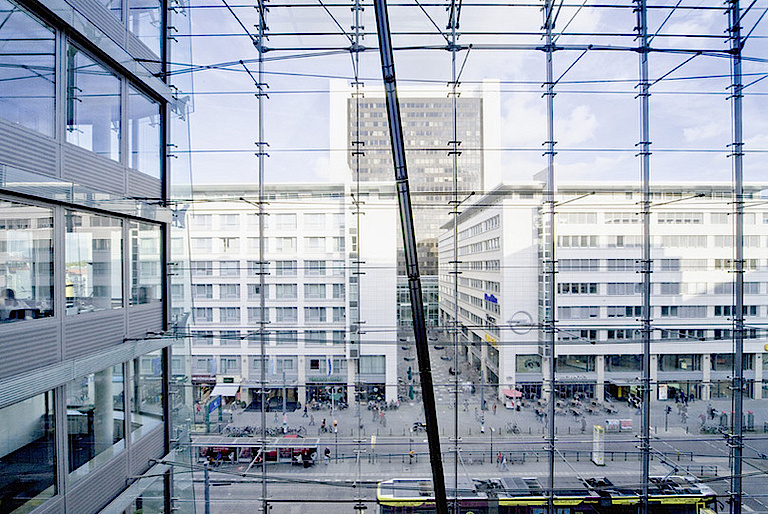 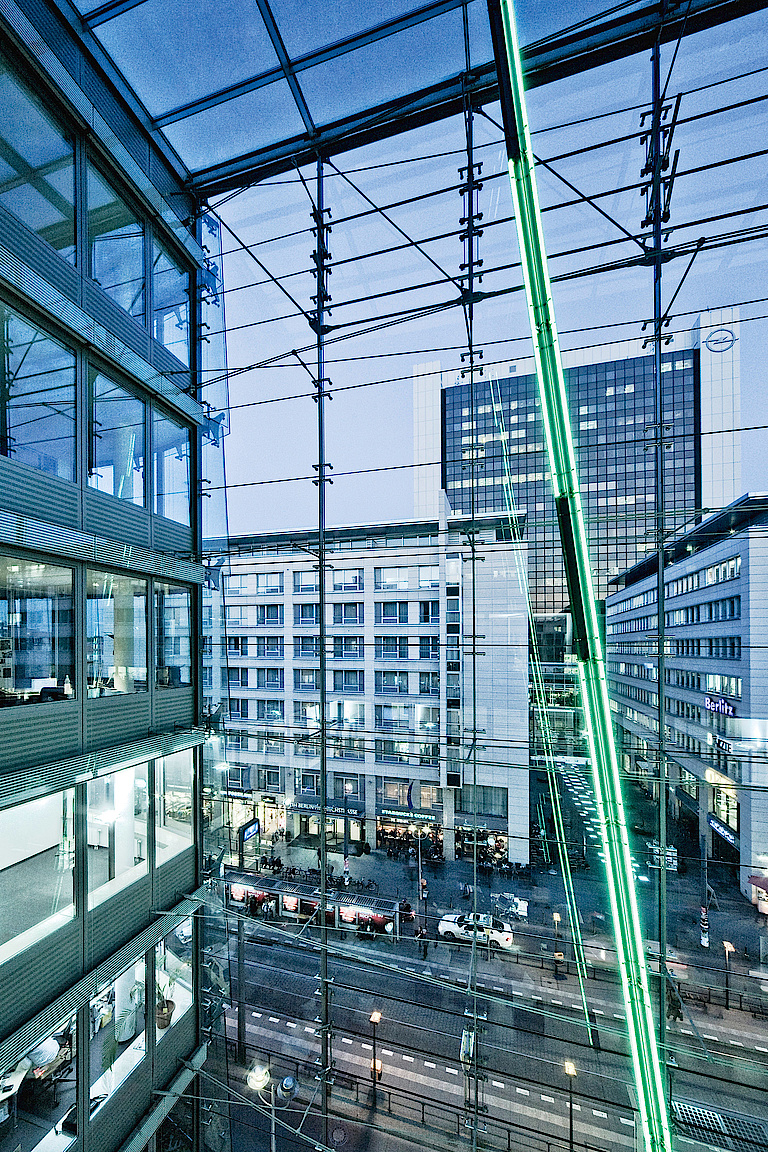 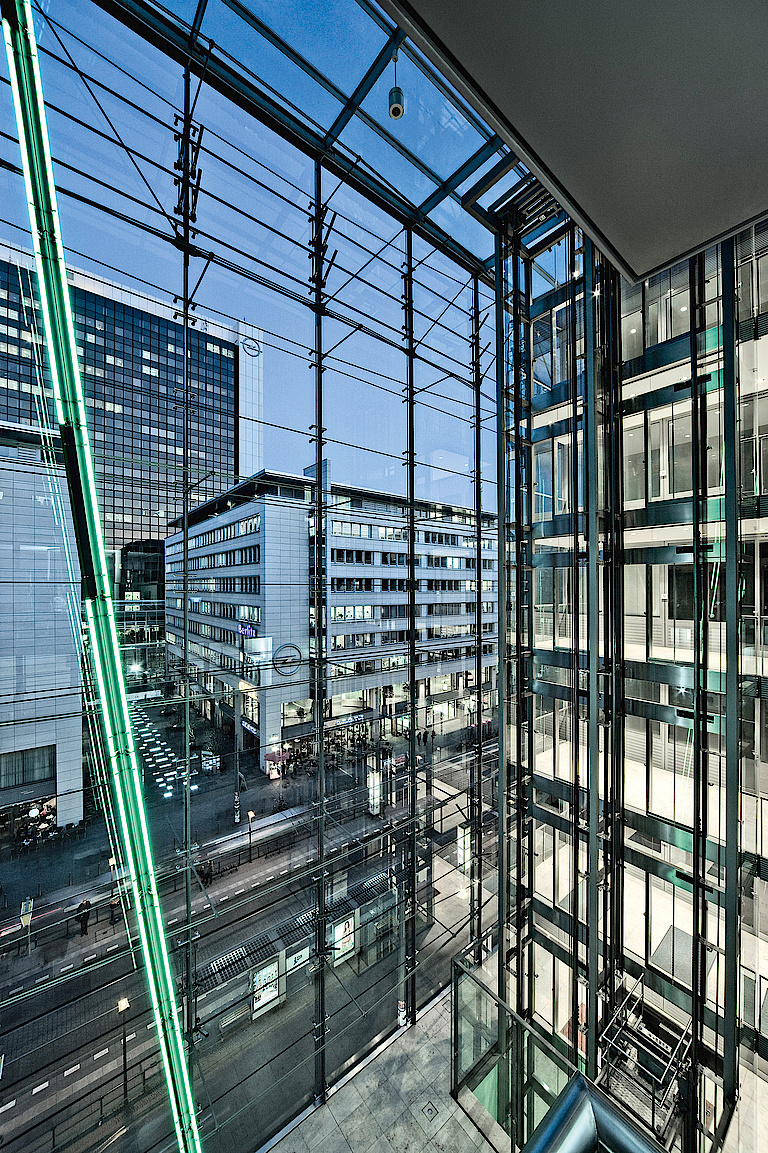 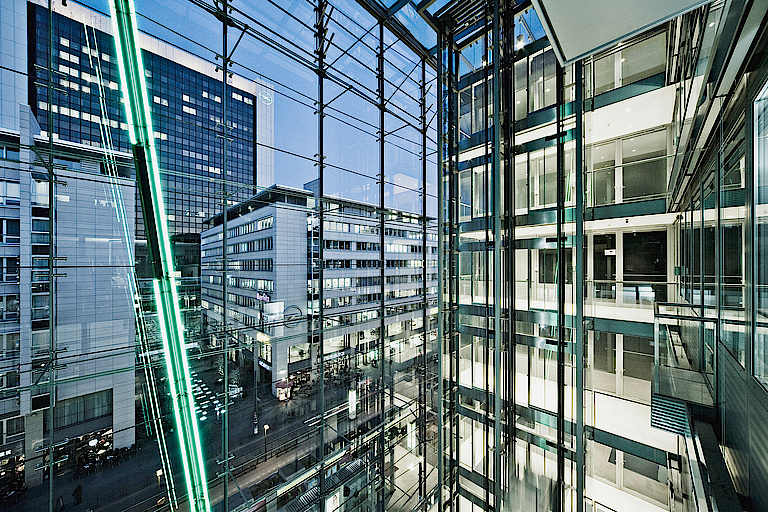 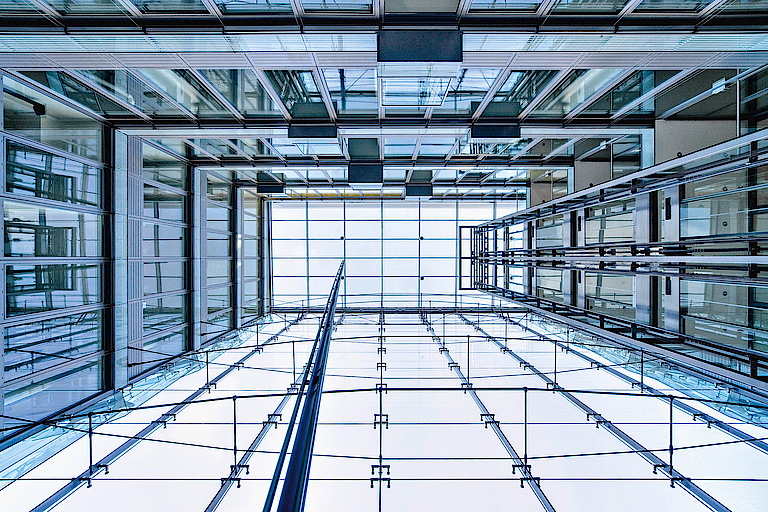 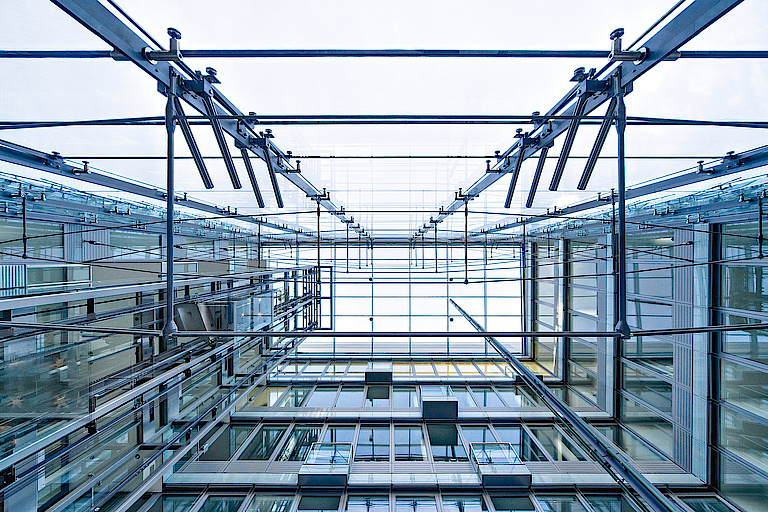 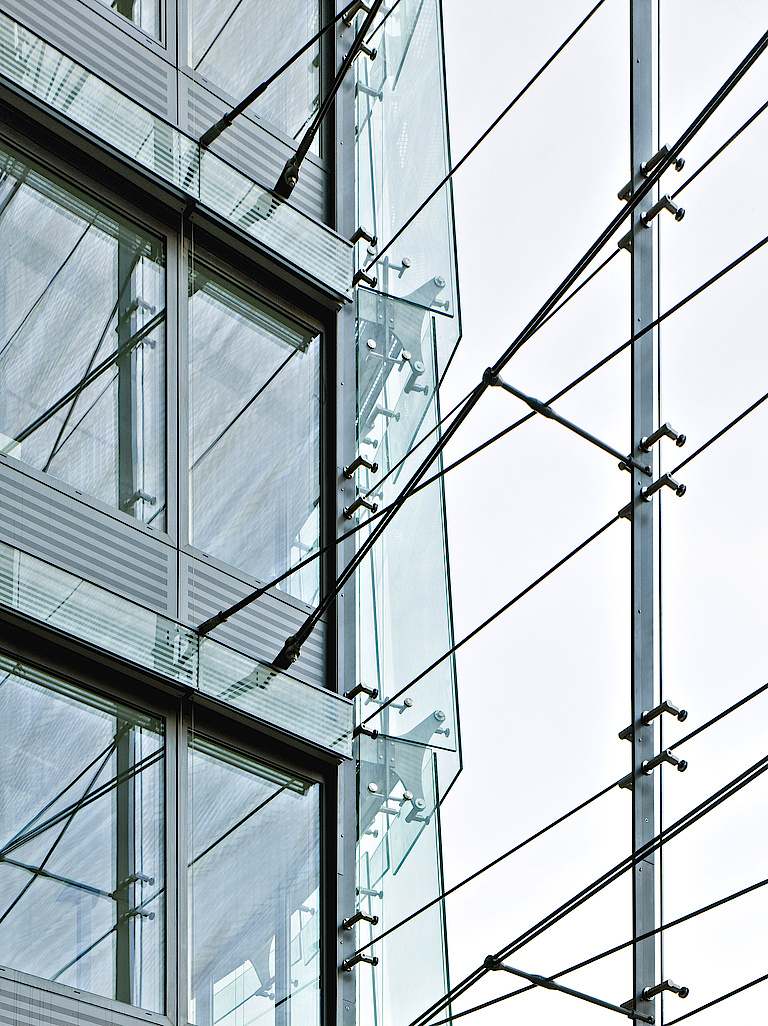 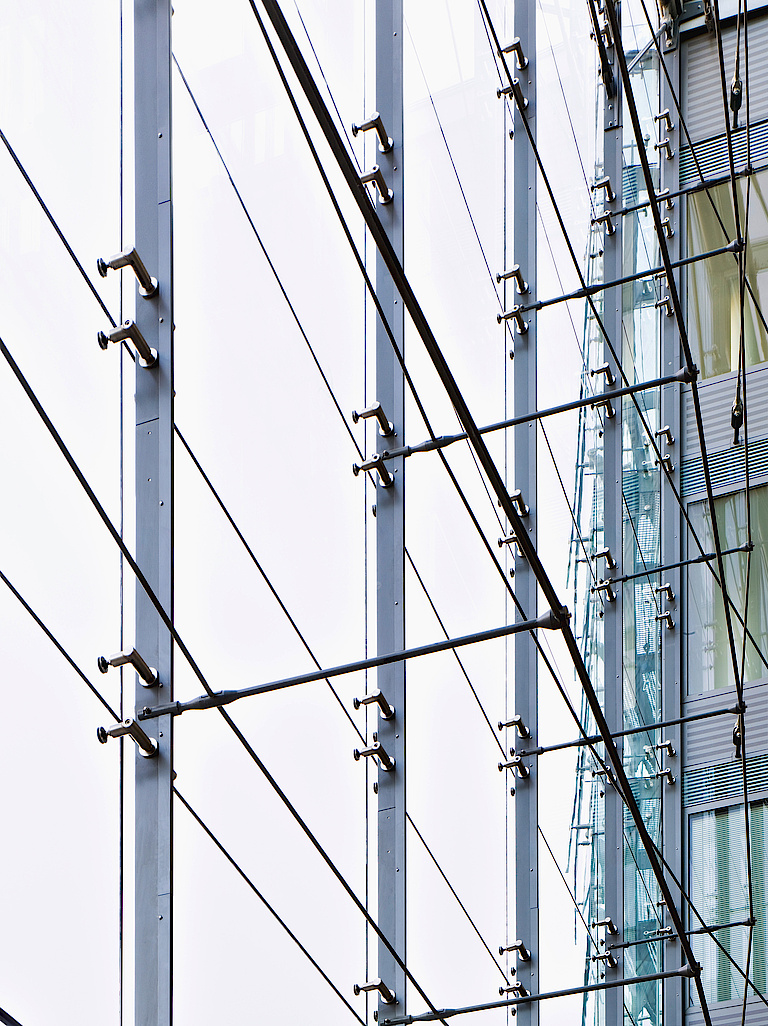 
The building is part of seven houses as one half of a large inner-city block just south of the busy Friedrichstraße station. In terms of urban planning, the block edge, the use of the ground floor for shops, the division into eight storeys and the inner courtyard with greenery were specified.

The office and commercial building forms the centrepiece of the side of the block on the extremely busy Friedrichstraße. It stands out clearly from its two neighbours due to its thoroughly glassy outer skin. This is divided into four zones: the ground floor and first floor as the base; the middle section in front of the atrium; and finally the left larger and right smaller, in both cases undulating façade in front of the individual offices.

The corrugated façades with their three axes on the left and two on the right - in which, in the manner of scales, the left edge of one pane slides over the right edge of the other - hang from slightly curved "boomerangs" at intervals in front of the windows of the offices. Together, the two façades look like the curtain of a theatre, which is pulled aside to the left and right to reveal the stage.

This stage is the atrium. Its end towards the street is smooth. The panes weigh about 20 tonnes; they hang from point supports, these from flat profiles, these from the arms of a storey-high girder with upper and lower chords. However, the eight-storey high atrium is not only a primarily glass enclosure towards the front, but also towards the other three sides and the sky. Two lifts glide up and down the south wall. The west wall stands out with several smaller balconies that play with the motif of interior as exterior. Behind the balconies lies part of the offices.

Viewed from the inside, the building proves to be a three-winged complex with individual and group offices served by two cores. The individual offices facing west, i.e. into the landscaped inner courtyard, all have tilt and turn windows and external fixed sun protection.