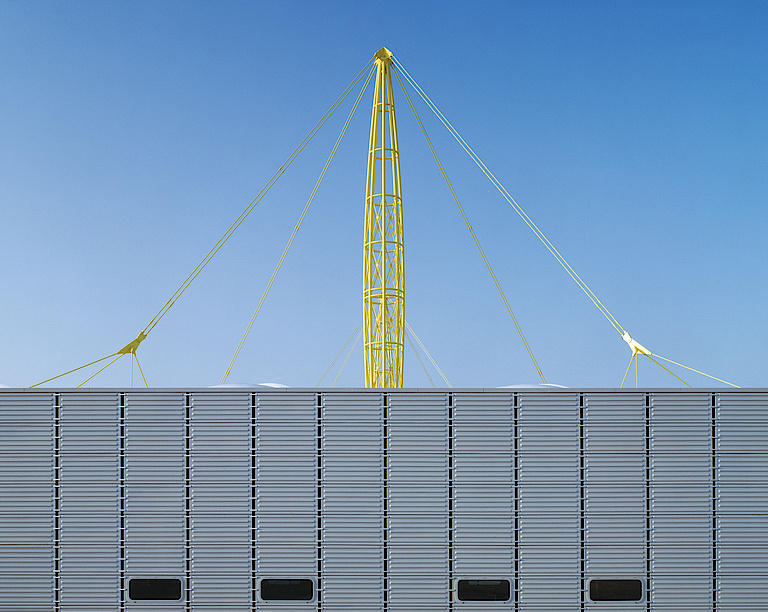 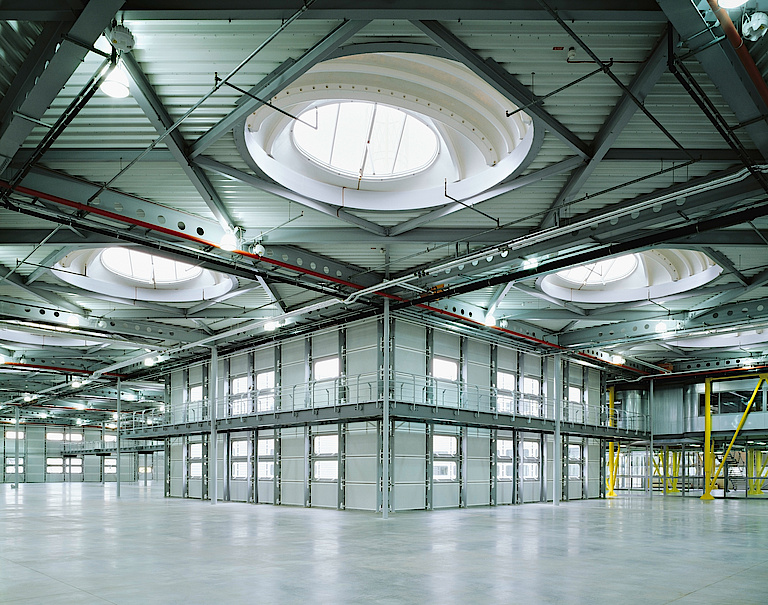 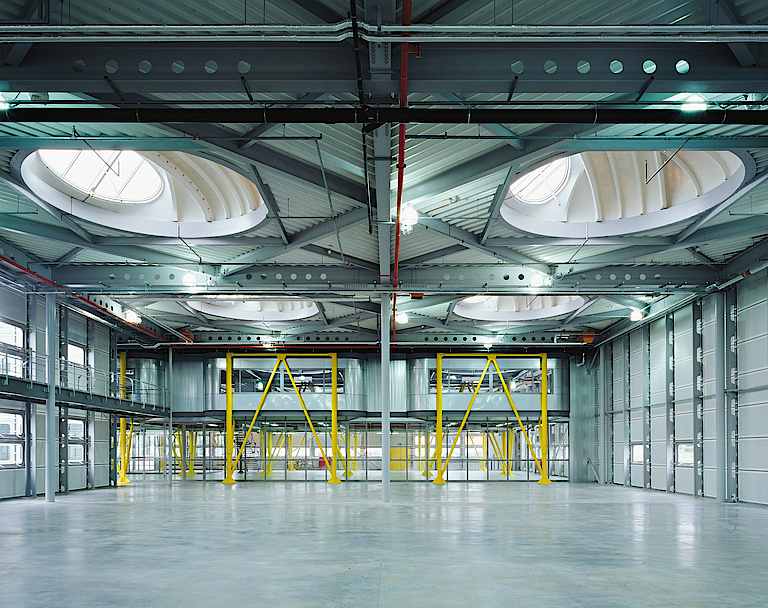 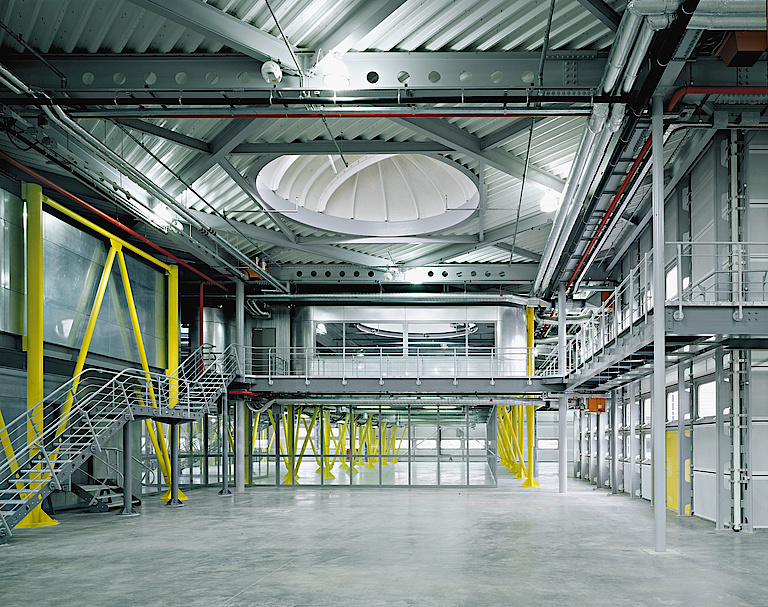 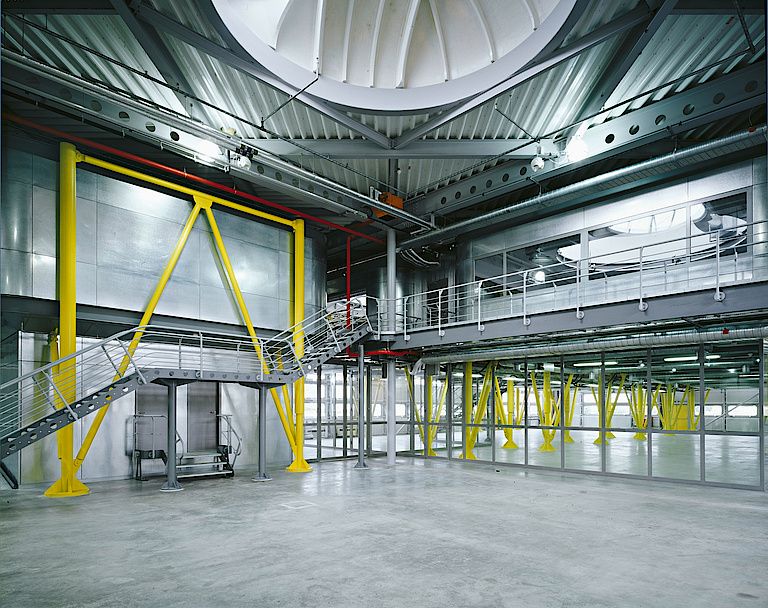 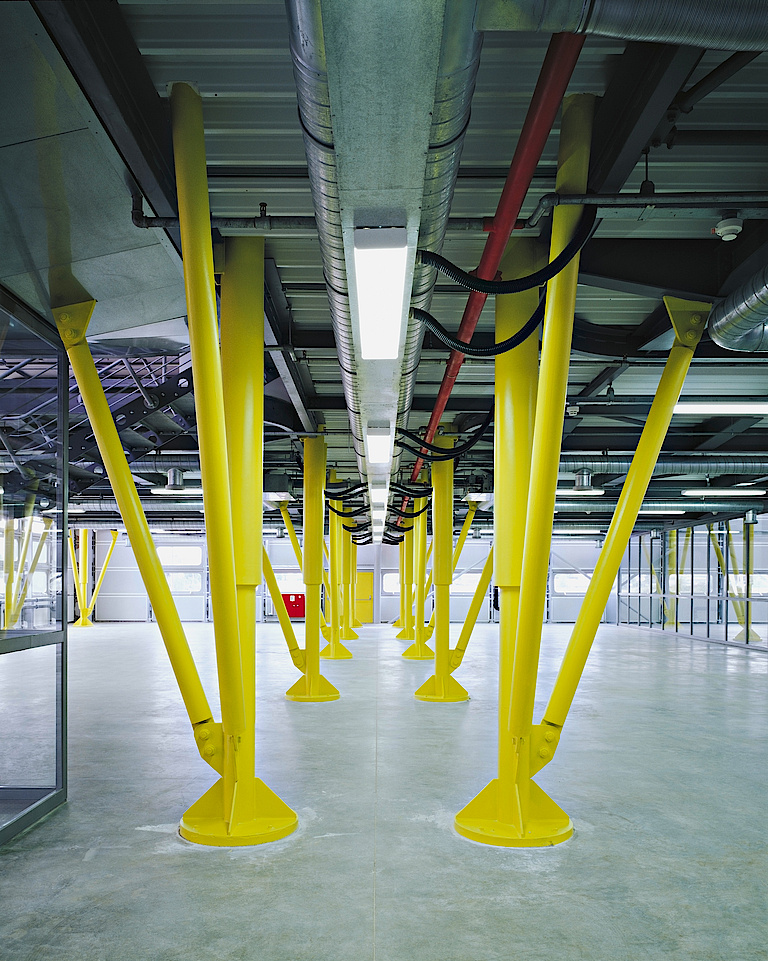 Gunter Blase, Chief Executive of Igus, a firm that makes injection-moulded plastic products, came to Grimshaw with a very specific brief: an innovative and striking building which would raise the profile of a successful, but insufficiently known company. It should demonstrate the principles of clear-headed design on which the company had based their own work and it should also embody Igus' non-hierarchical management structure, described as a 'solar system', whereby the company is composed of different groups of equivalent status. Clients deal directly with individual groups and can move readily from one to another according to their needs.

The primary task of the building is to provide the flexibility and the ability to grow that the company requires. The nature of the company's work involves an unpredictable future, and the capacity to change internal factory layouts rapidly and often.

The result is a building that is as much an approach, or a process, as it is a finished object. Its plan of four blocks, each six bays by six, can be built in up to seven phases: first one complete block, followed by the others in halves. Each block has an open-lattice steel mast at its centre from which steel rods reach out to carry the roof, creating huge, unimpeded internal spaces. Working with internal beams, the mast structure enables spans of up to 33m.

The only insertions into these spaces, other than the factory machinery, are the elevated walkways and the movable pods for offices, WCs and recreational rooms. The walkways enable visitors to tour the factory and clients to move about the different groups with which they deal, while providing 'expressways' for employees to move rapidly about the building. Placed on the cross axes of each block, they distribute the services, all of which - including pumped drainage - are located overhead. This liberates the factory layout from the need to match fixed connections in the floor. A siphonic rainwater disposal system drains the roof. By using suction as well as gravity, this enables the use of horizontal pipe runs and smaller pipe diameters.

The office pods can be dismantled and assembled in two weeks, a variation for the later phases has been developed which will rest on air cushions, so the pods may be moved over a weekend. The pods' splayed feet spread their load, which avoids the need for localised foundations. Each pod has its own services box, which can be plugged into the building's overall system through flexible ducts. The upper levels of the pods are reached by stairs assembled in two parts, each of which can be carried by a forklift truck. Inside the basic structure there is virtually nothing that cannot be moved or altered.

Igus is the latest and most flexible in a line of flexible, panelled, wide-span buildings, providing a landmark In a largely featureless landscape. The masted structure is conspicuous from the nearby autobahn, the railway line and even the flight paths to the airport. It announces both a company and a building wedded to inventiveness.