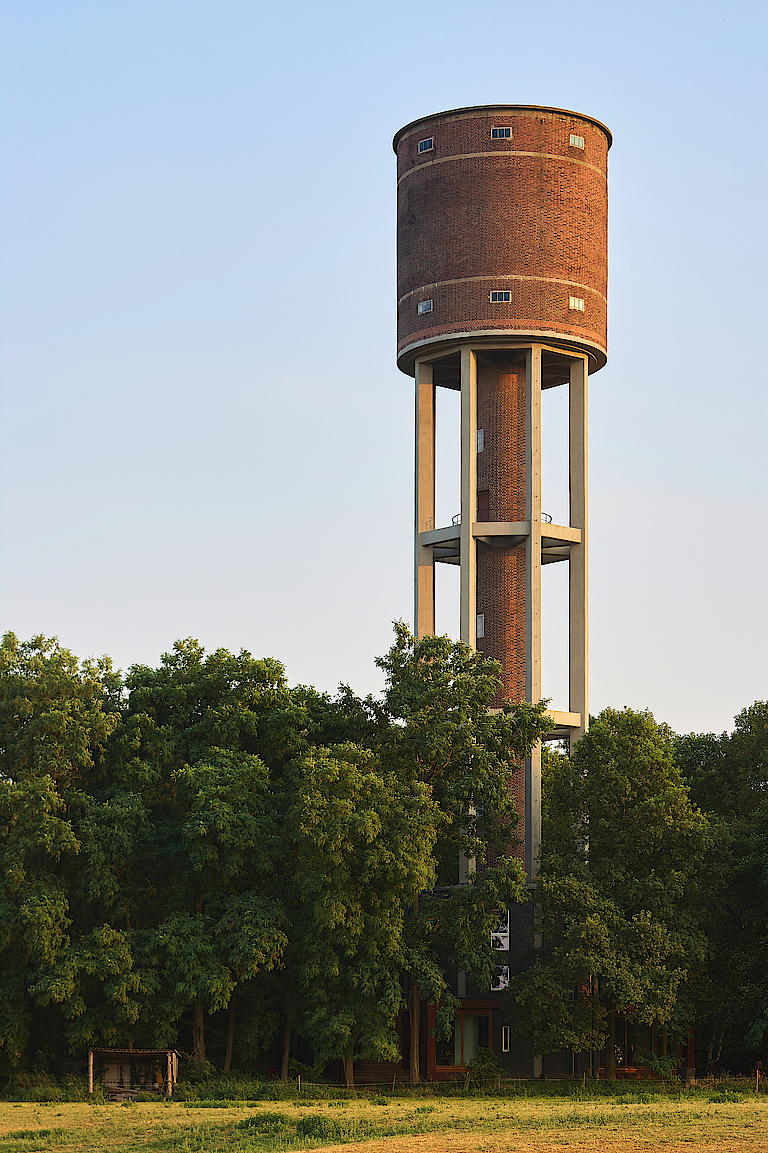 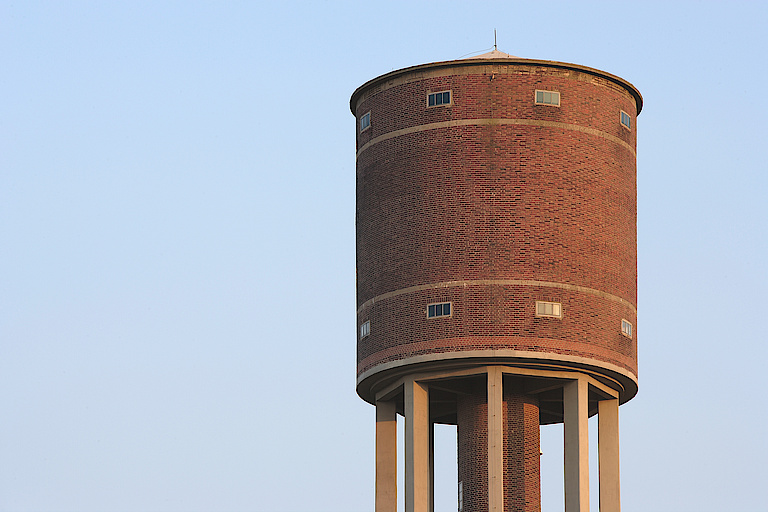 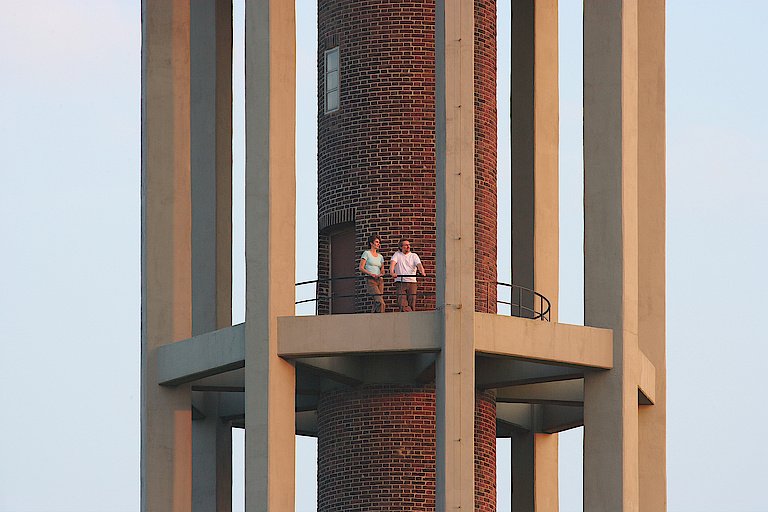 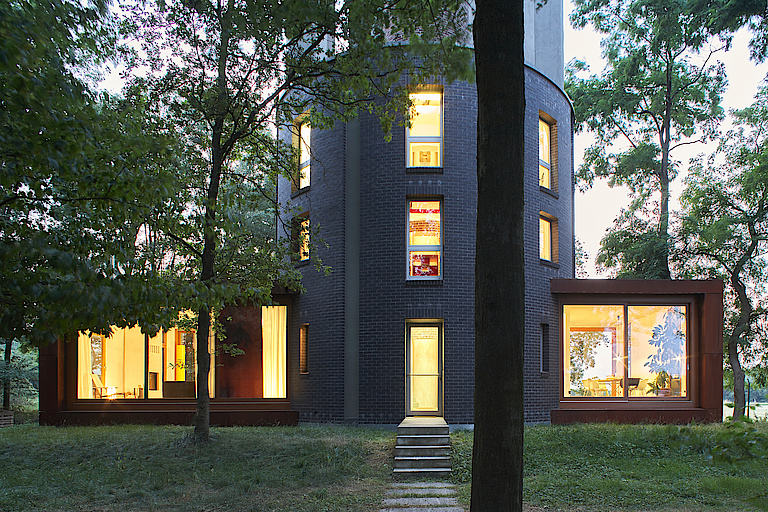 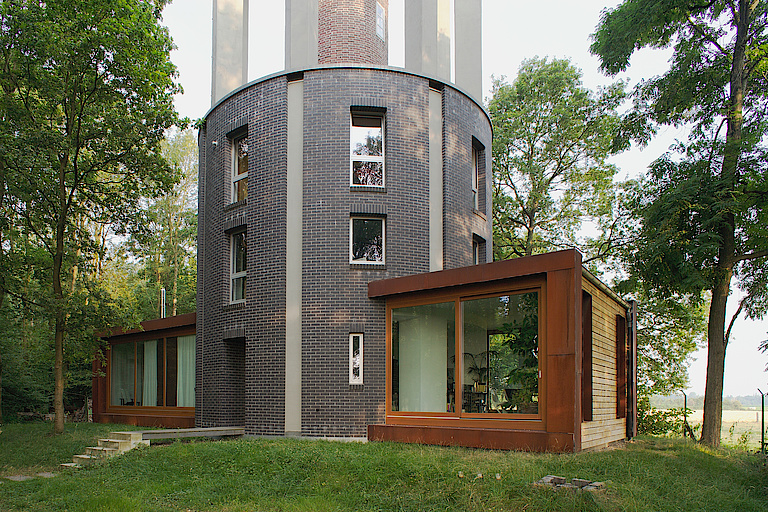 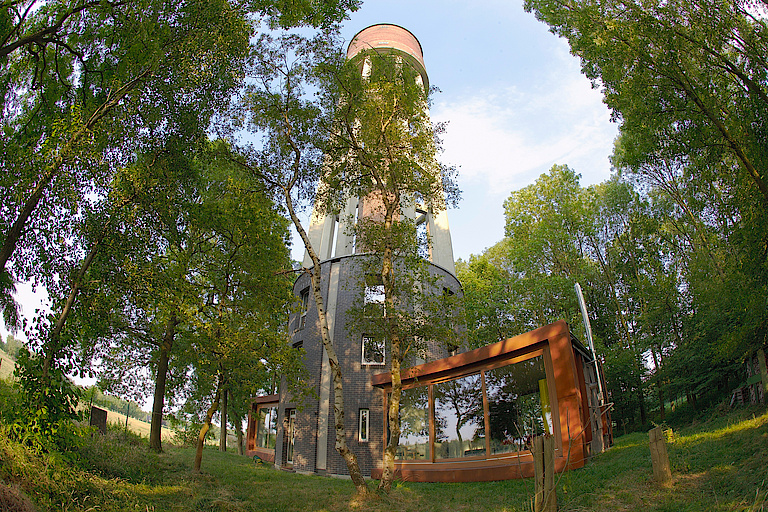 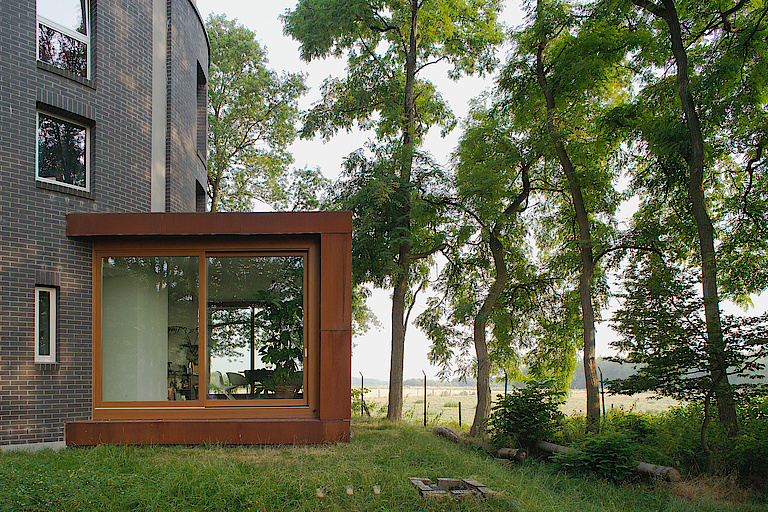 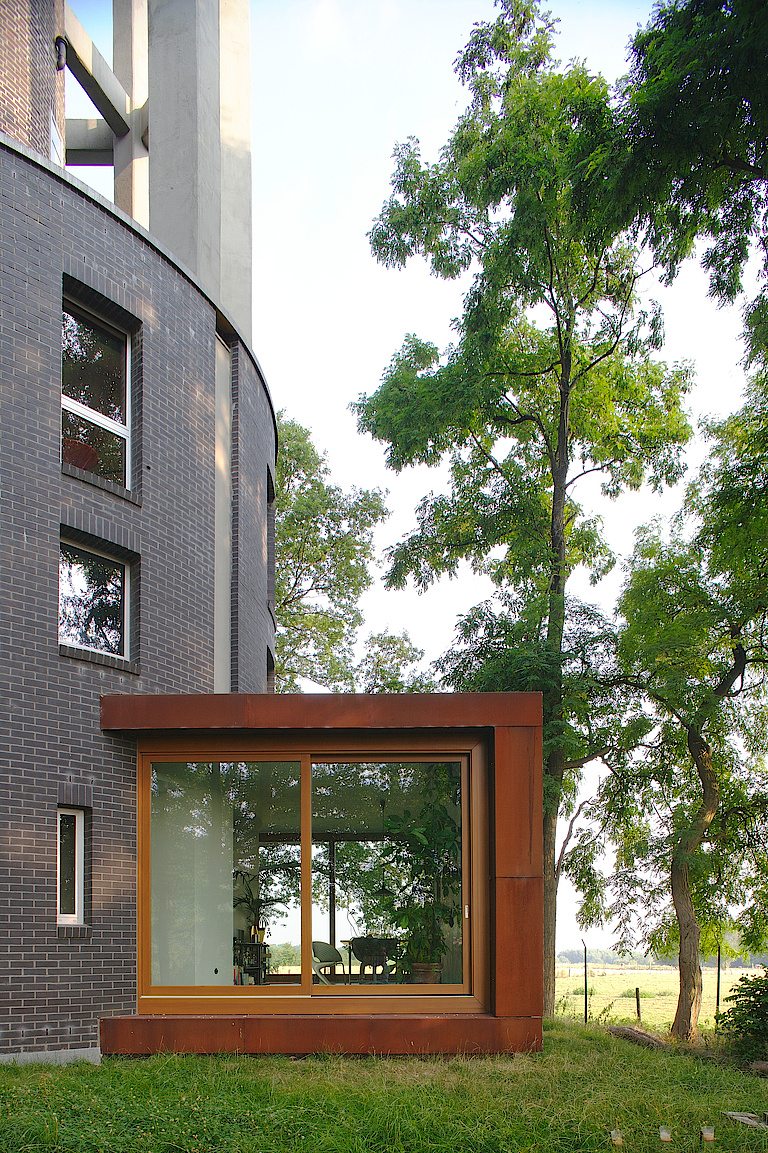 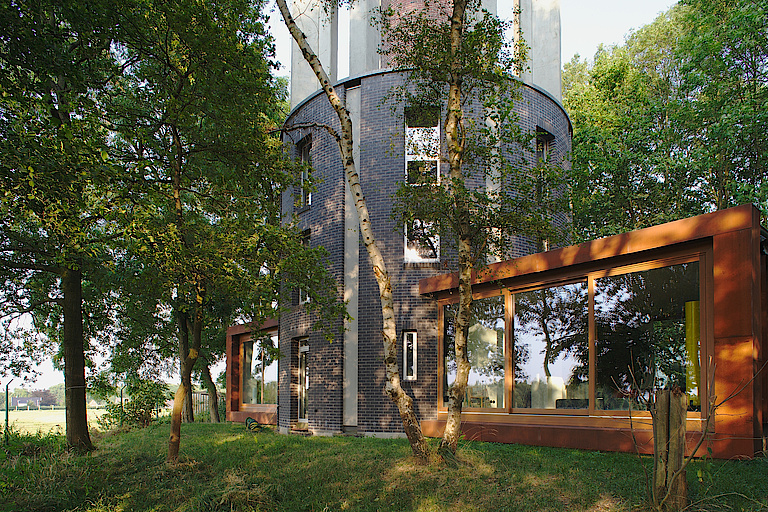 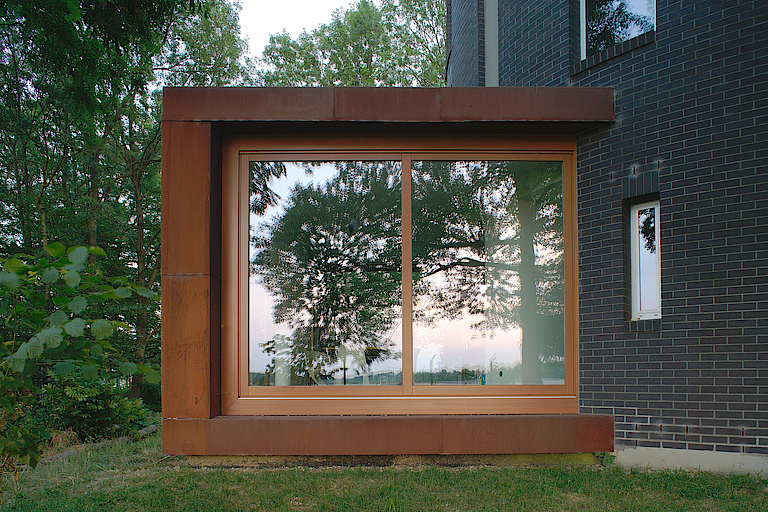 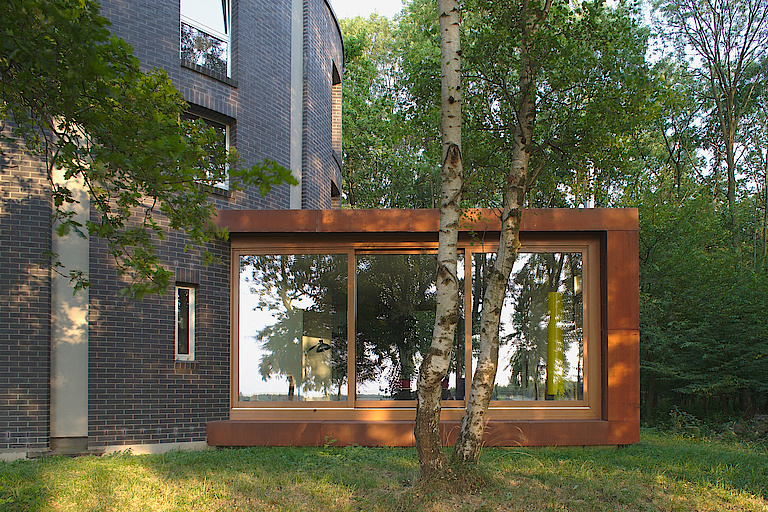 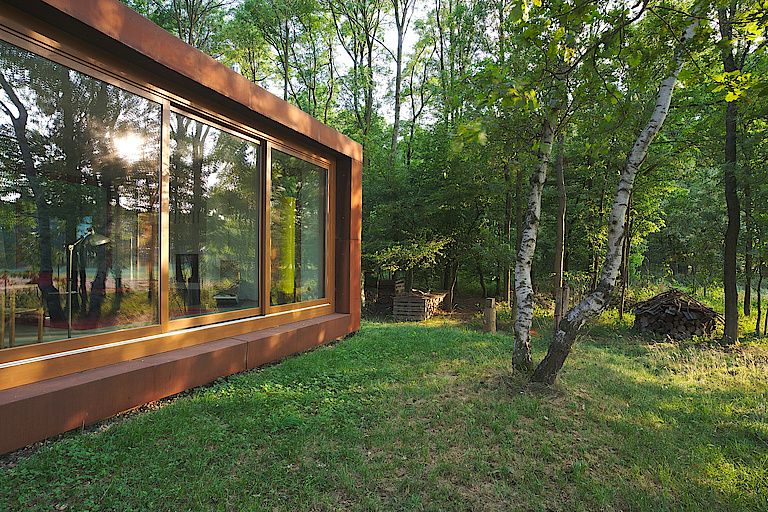 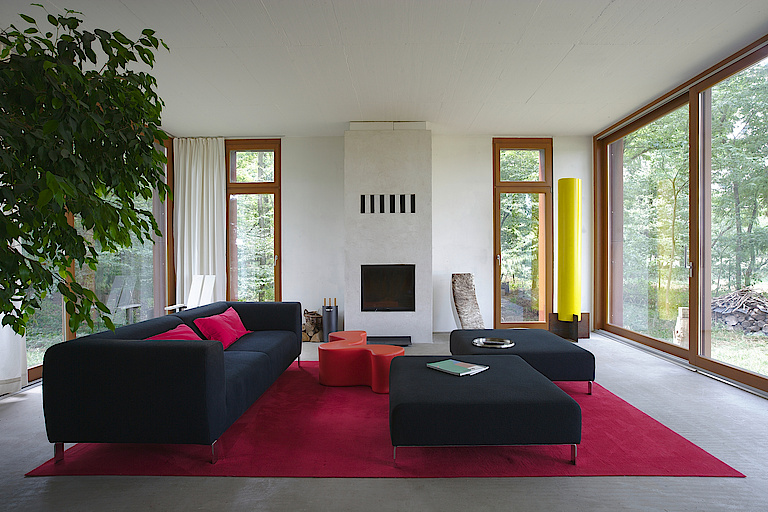 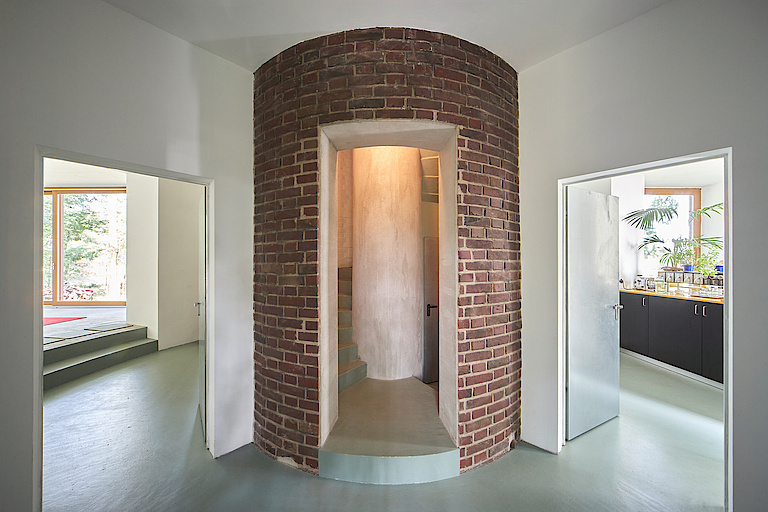 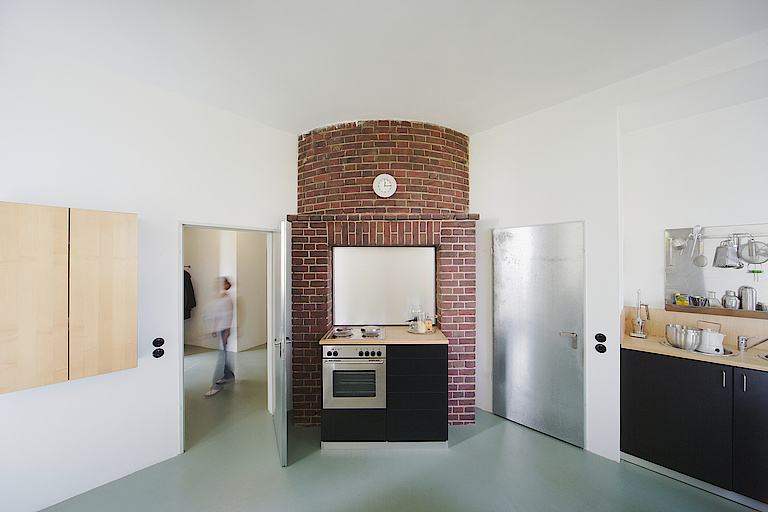 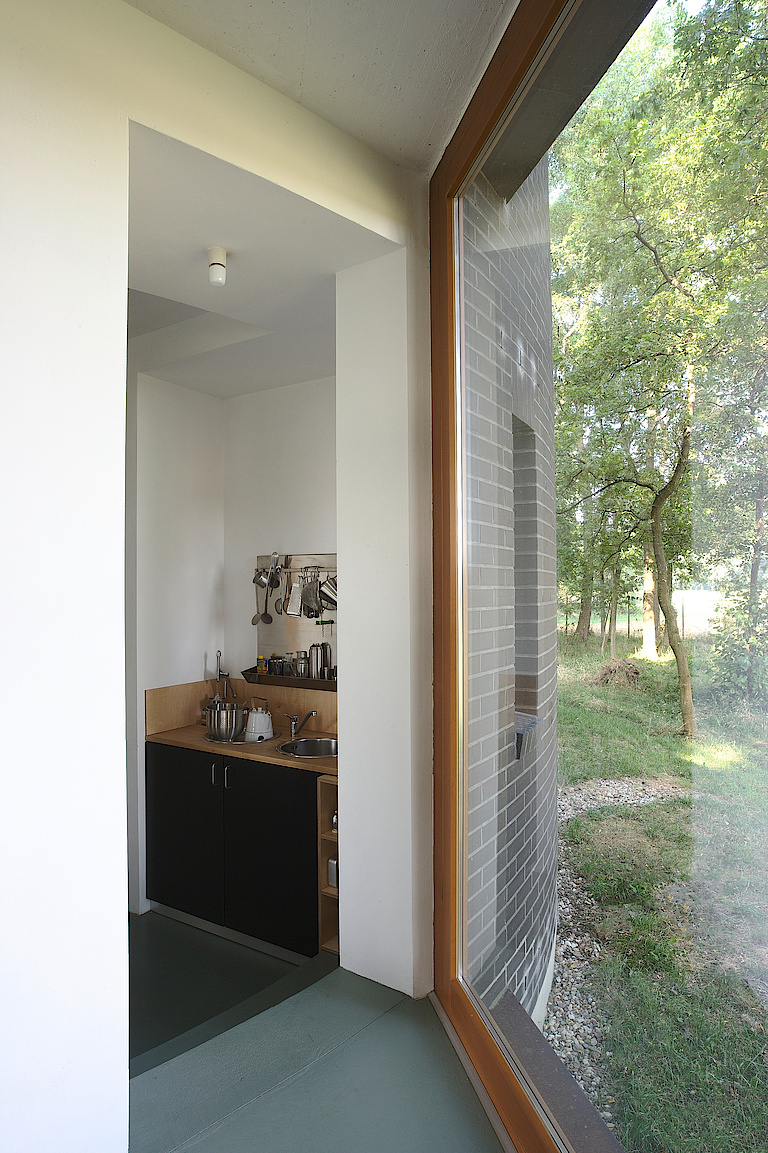 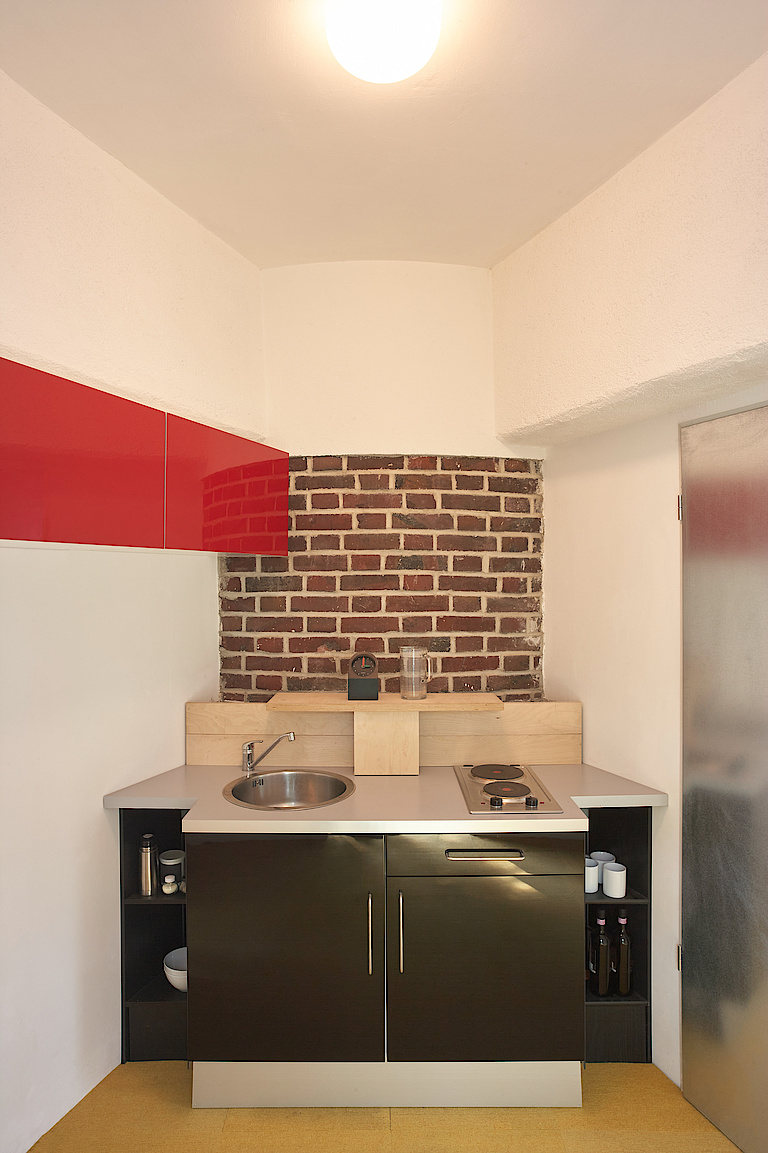 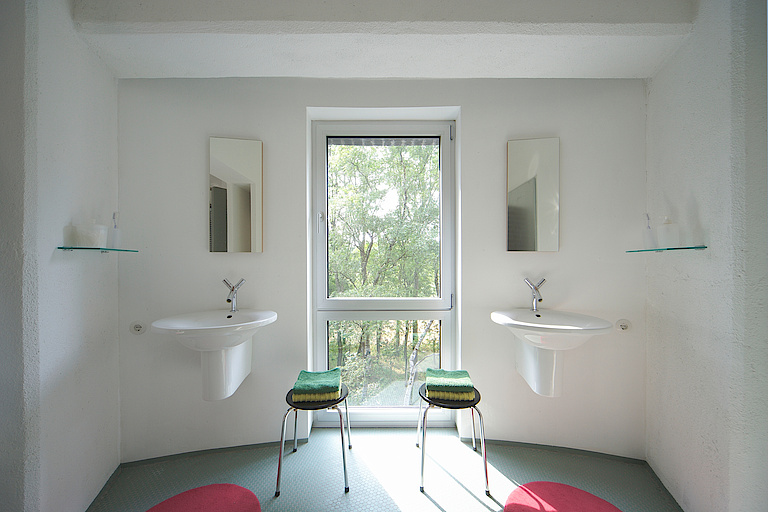 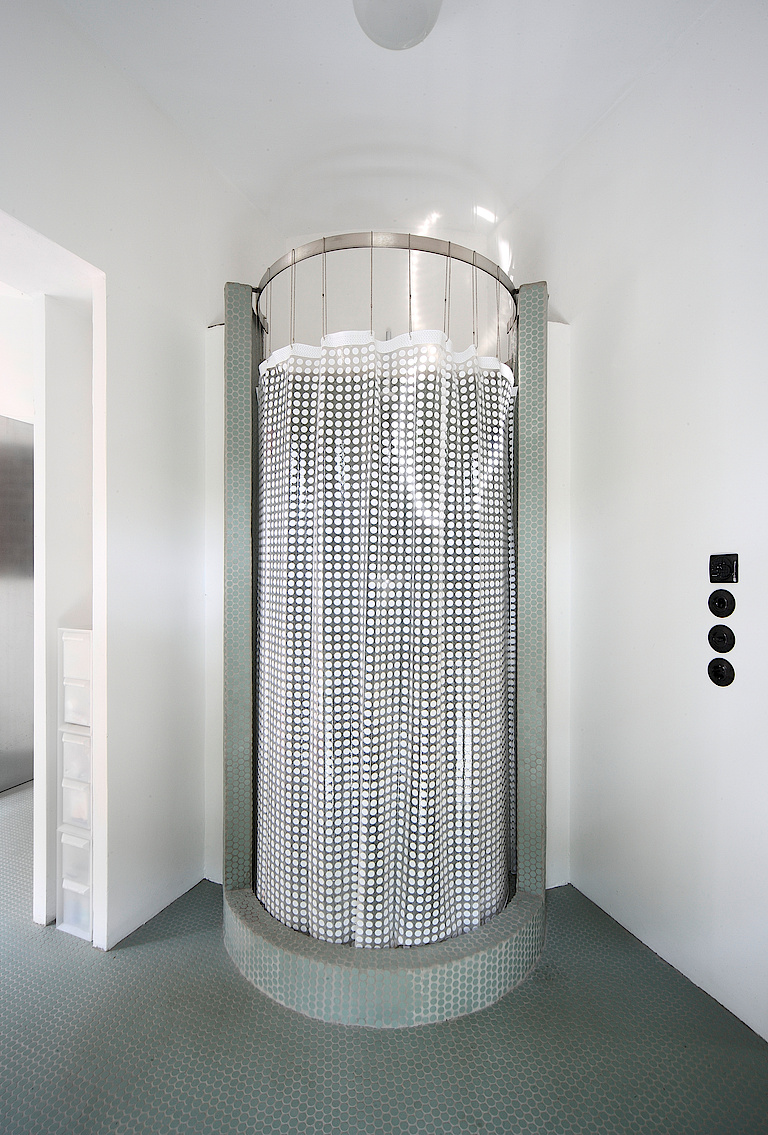 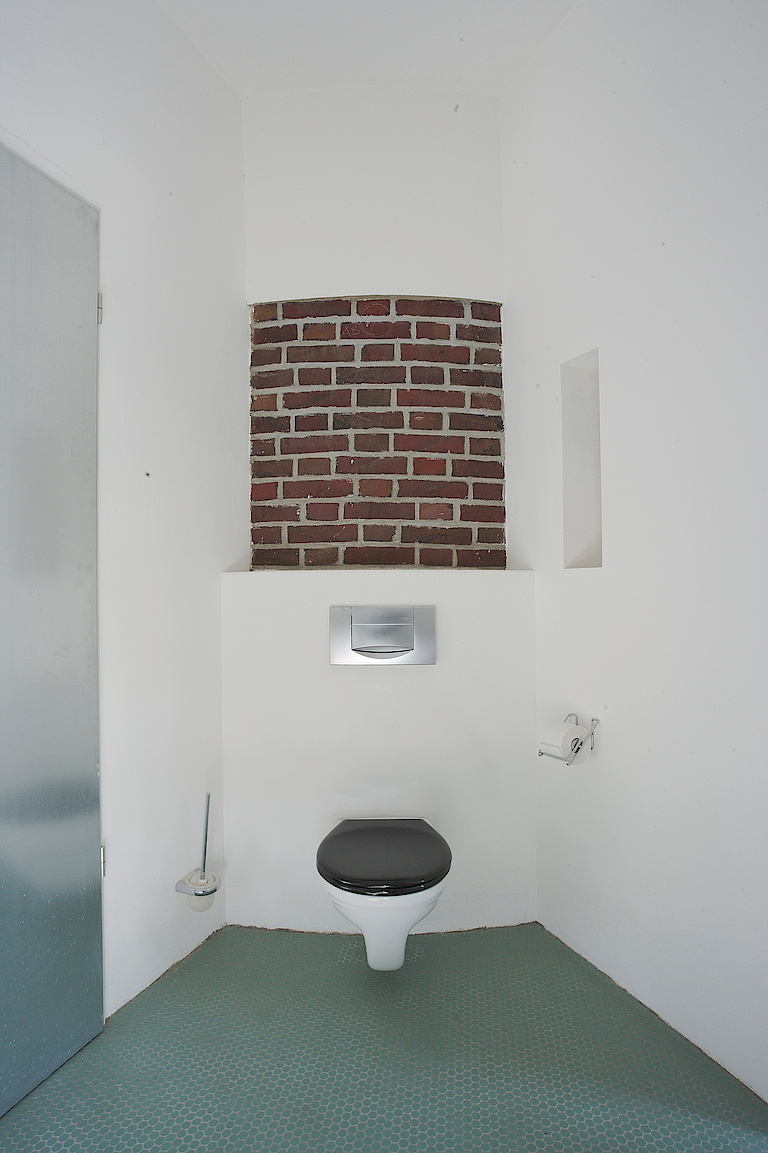 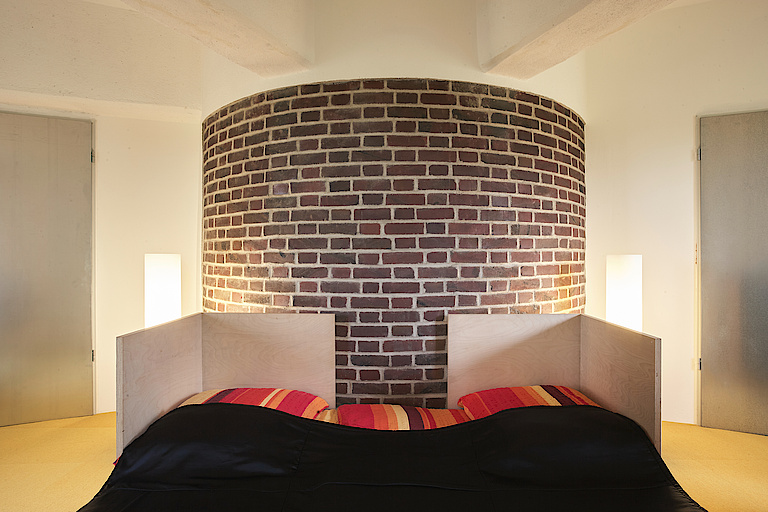 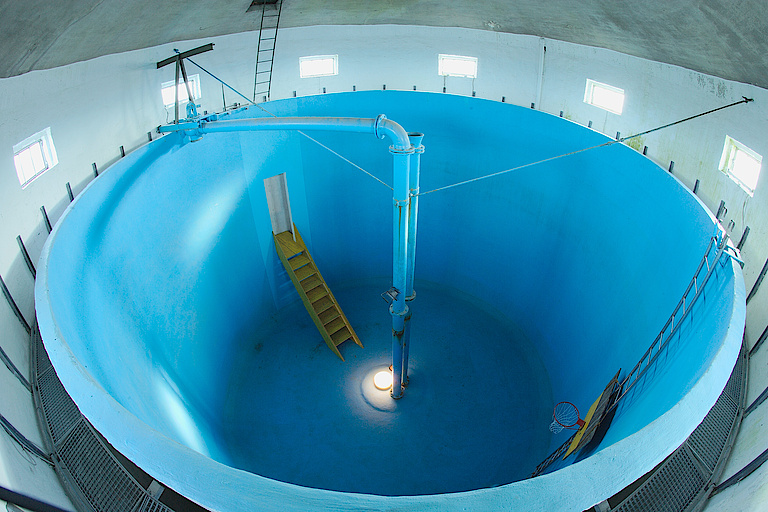 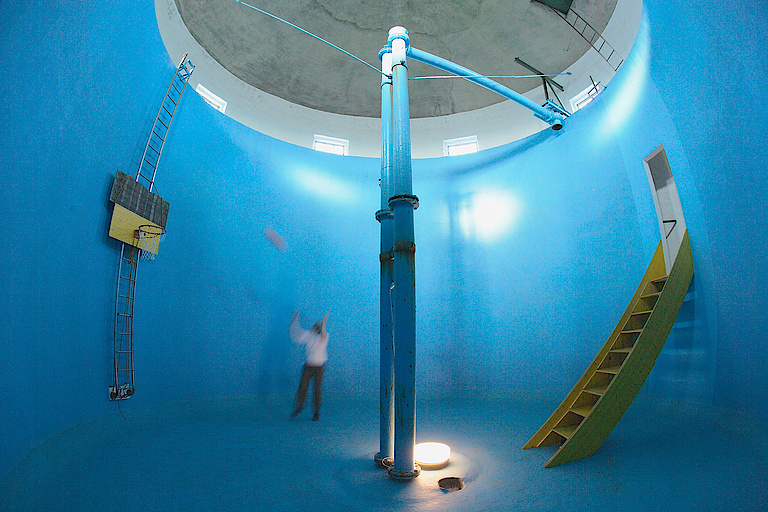 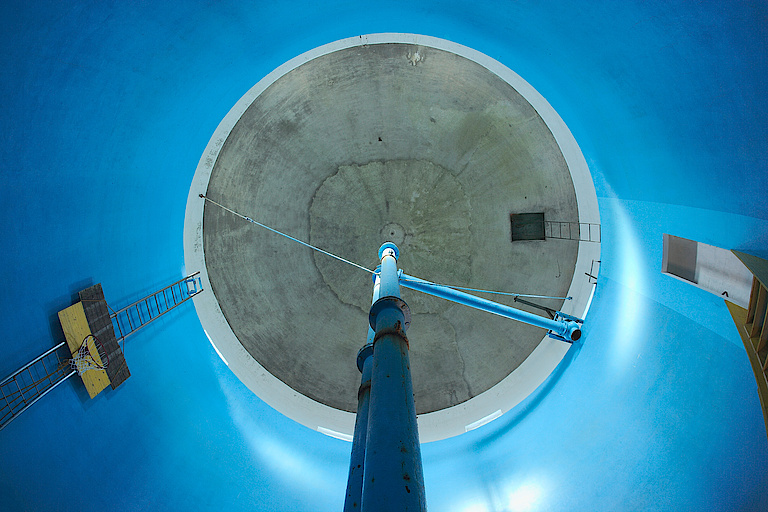 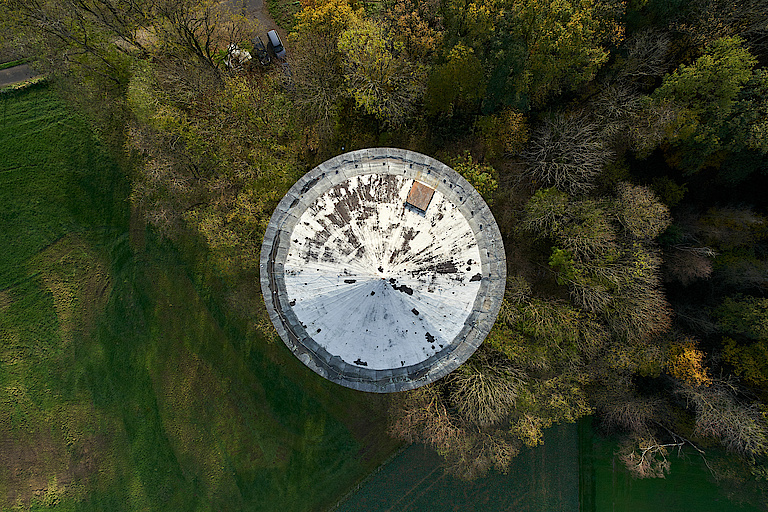 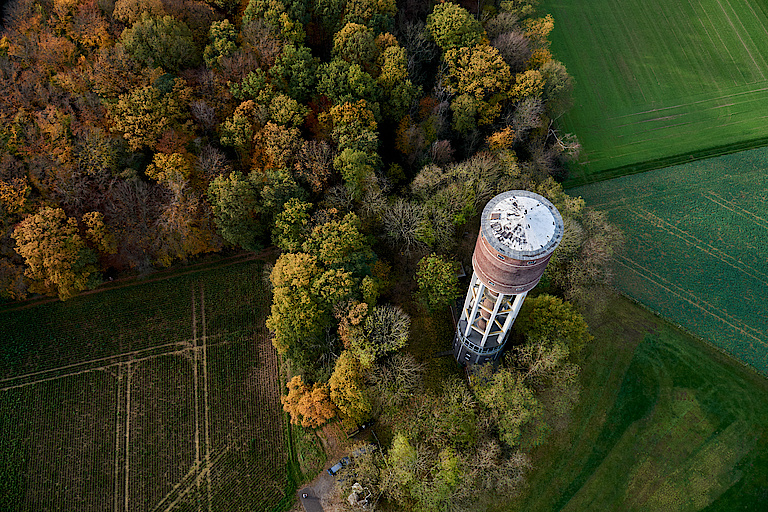 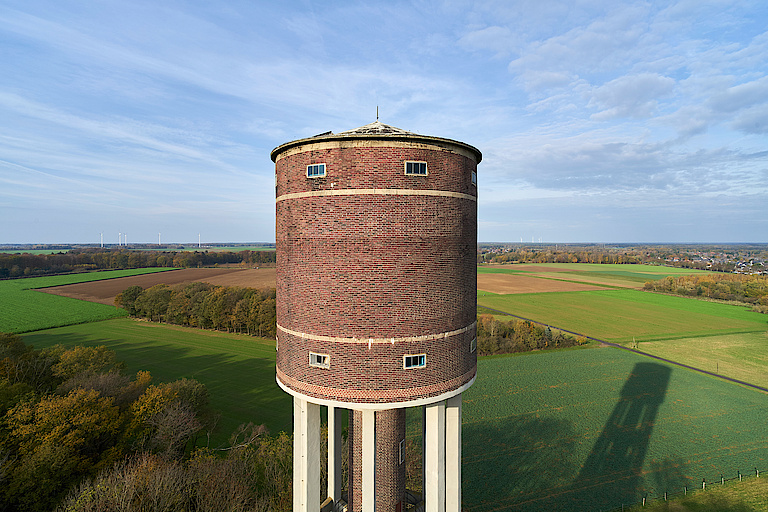 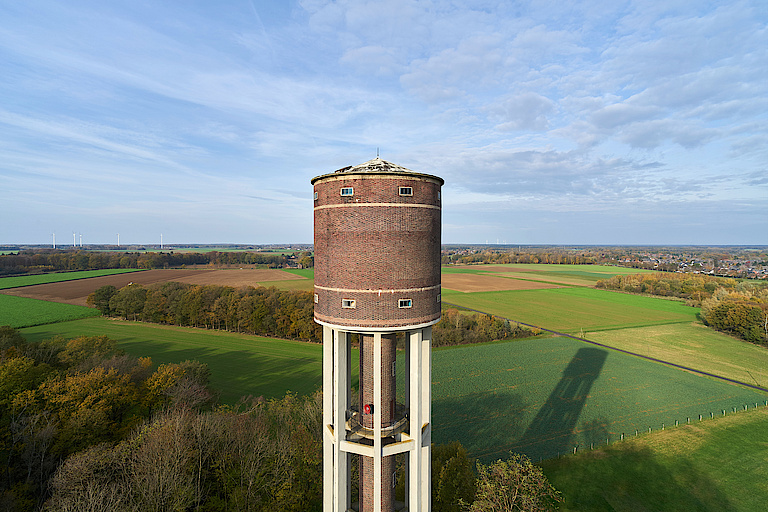 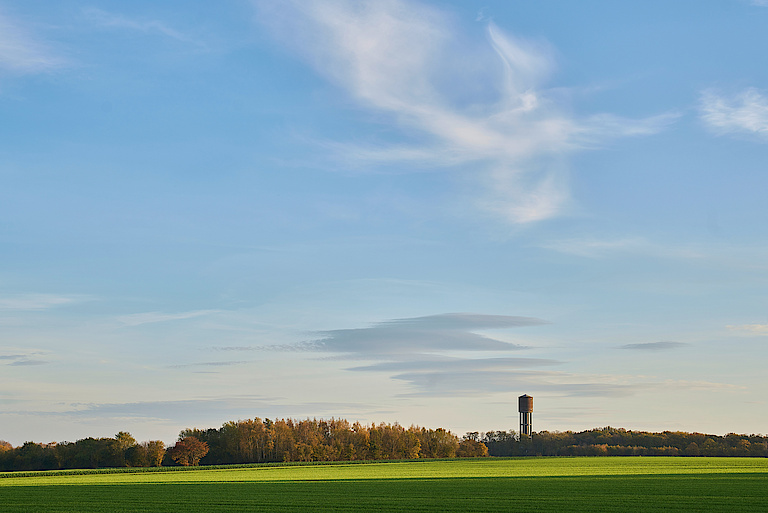 Living and working in the Uevekoven water tower

Norbert Kostka and Ute Reimund both have a soft spot for industrial monuments.

With their current domicile, the water tower in Uevekoven, they have realised a dream. Norbert Kostka, an architect by profession, had already converted a water tower into a gallery in Cologne. What fascinated him most about it was the clear architectural language. He actually wanted to live in such pure forms. They set out to find a suitable object. The water tower in Uevekofen near Wegberg was love at first sight.

The Uevekoven water tower is a brick tower that was put into operation in December 1934. It has a double-shell construction to keep the drinking water fresh even at high outside temperatures. A reinforced concrete tank is located inside the wall.

The tower has a crown of eight concrete pillars, the buckling length of which is shortened by freely inserted transoms. The piers surround the brick tube that contains the staircase to the tank, and the bottom plate of the tank cantilevers above them. The cylinder of the water tower head is horizontally divided by several plaster bands. Between these bands the light openings are arranged as horizontal formats.

Standing on a slight hill at the edge of the Tüschenbroich forest, the tower takes on the character of a landmark in the otherwise flat landscape.

Visible from afar, the 53-metre-high industrial monument is located to the west of the village. Its tank holds 400m3 at 124.447 above sea level = about 43m above ground.

In his renovation concept, Norbert Kostka also followed the idea of interfering as little as possible with the substance and leaving the tower as an industrial monument. The living quarters at the foot of the tower have been newly added. Around the narrow brick tube of the staircase, the brick cylinder of the water tower head was repeated in the same dimensions. On the first floor is the working area with several desks. Depending on the position of the sun, one can choose the most beautiful spot. Above this are the bedroom, guest room, walk-in wardrobe and the bathroom area. For the living room and kitchen, a cubic extension was added at ground level on both sides of the tower, so the couple at least allowed themselves a few straight walls. It is not easy to furnish a round water tower. There is hardly enough space for dignified cupboards and bookcases. You have to be prepared for that.

The beautiful experience of nature and space in Uevekoven requires some muscle power to climb up. But when you step onto the viewing platform at a height of about 35 metres, you are presented with a unique 360-degree landscape panorama.

A few steps higher, the walk-in water tank remains unchanged - a rarity. With its extreme acoustics, this room is an incomparable place for sound artists. And it is also regularly used for sound concerts.