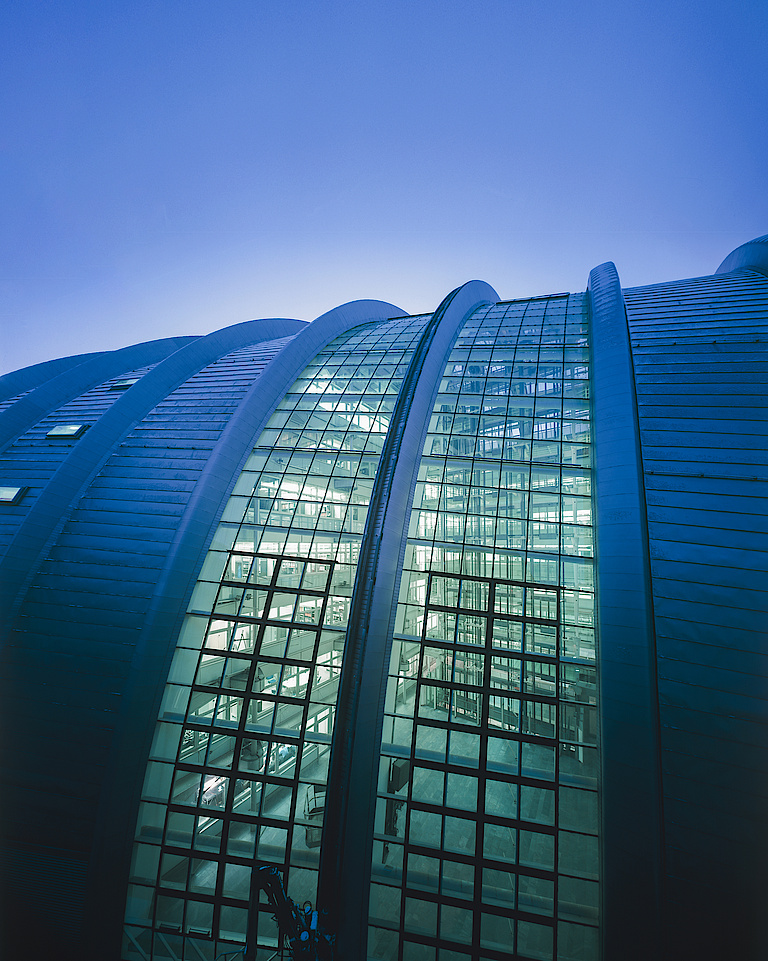 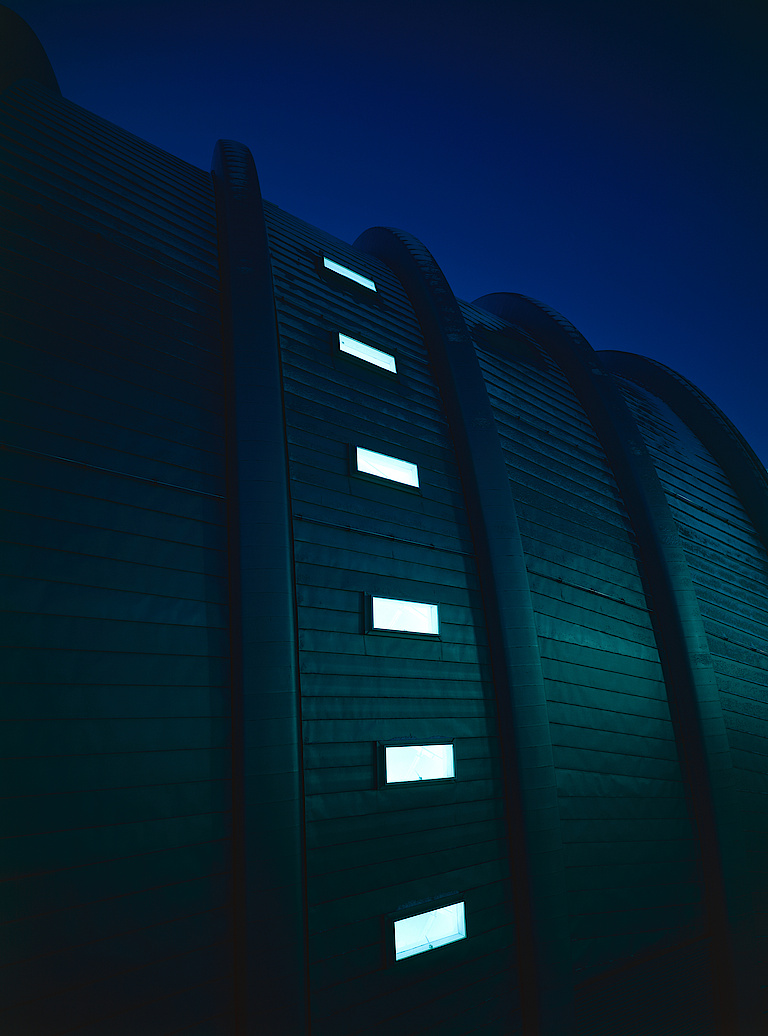 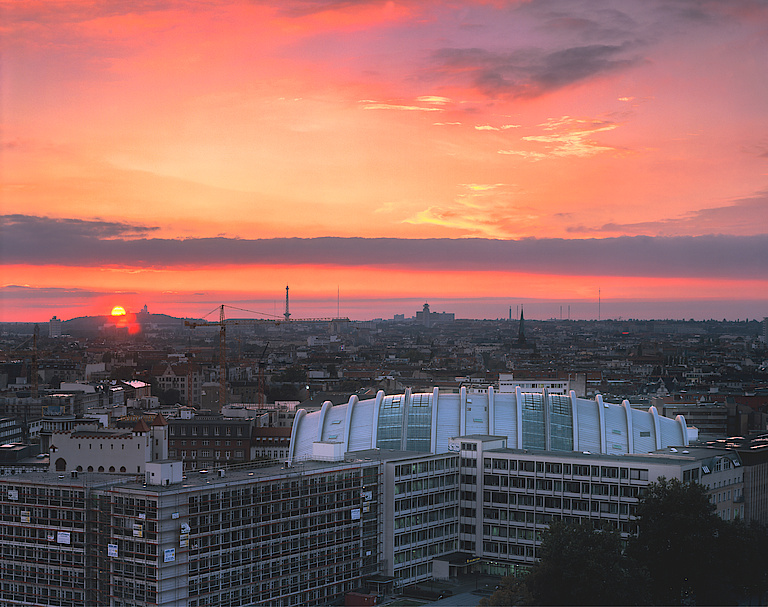 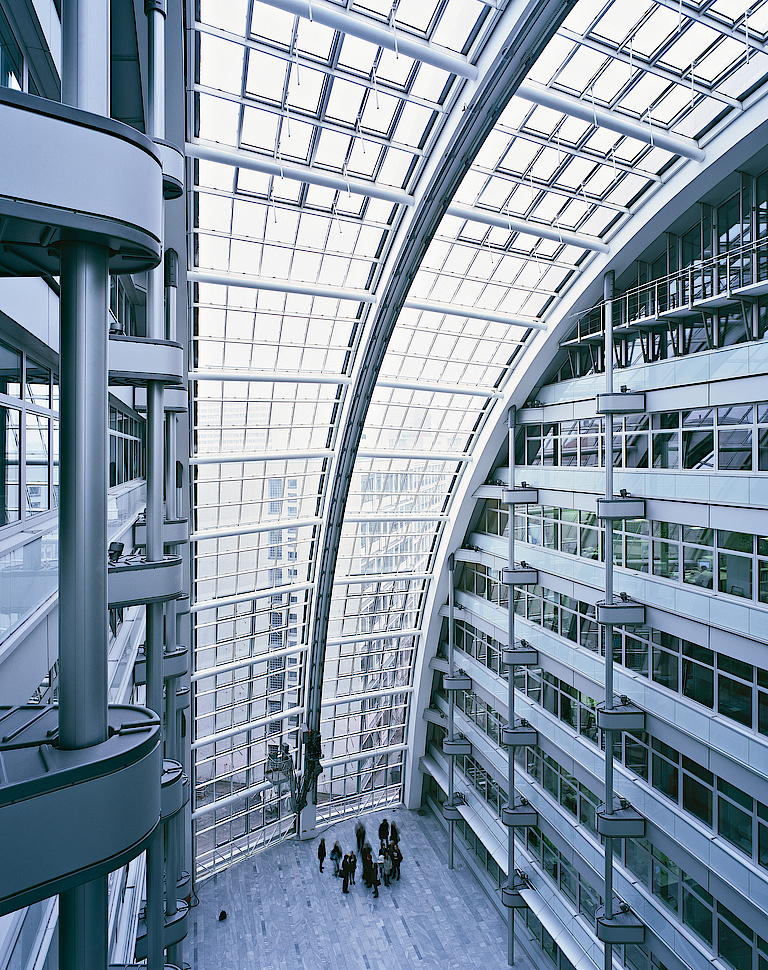 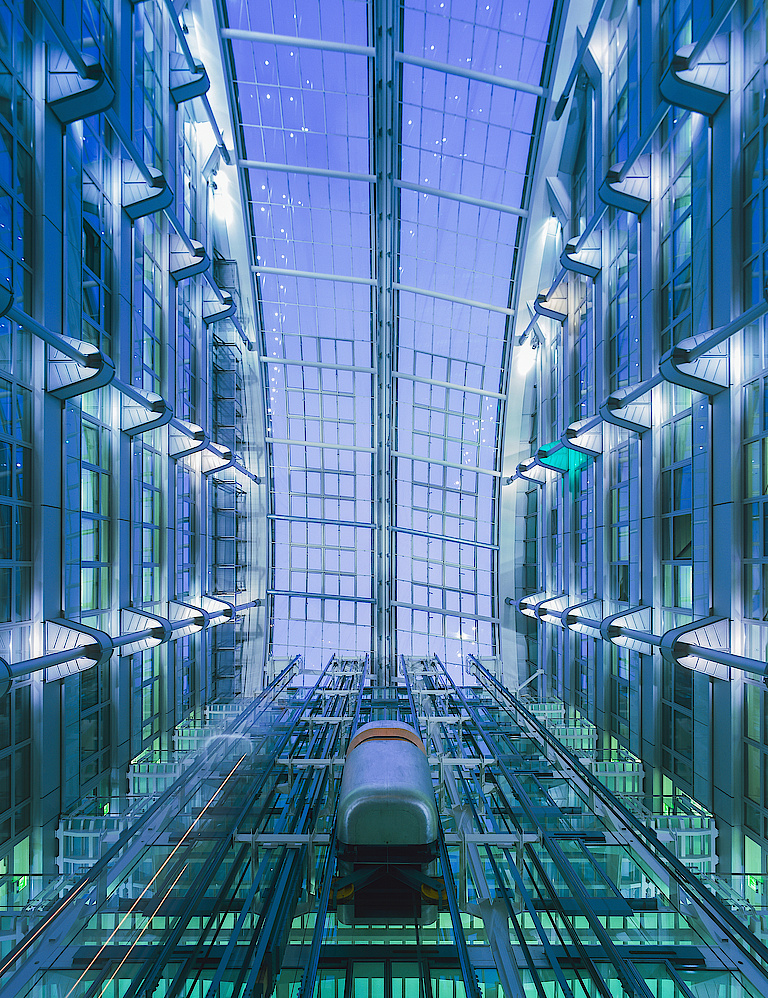 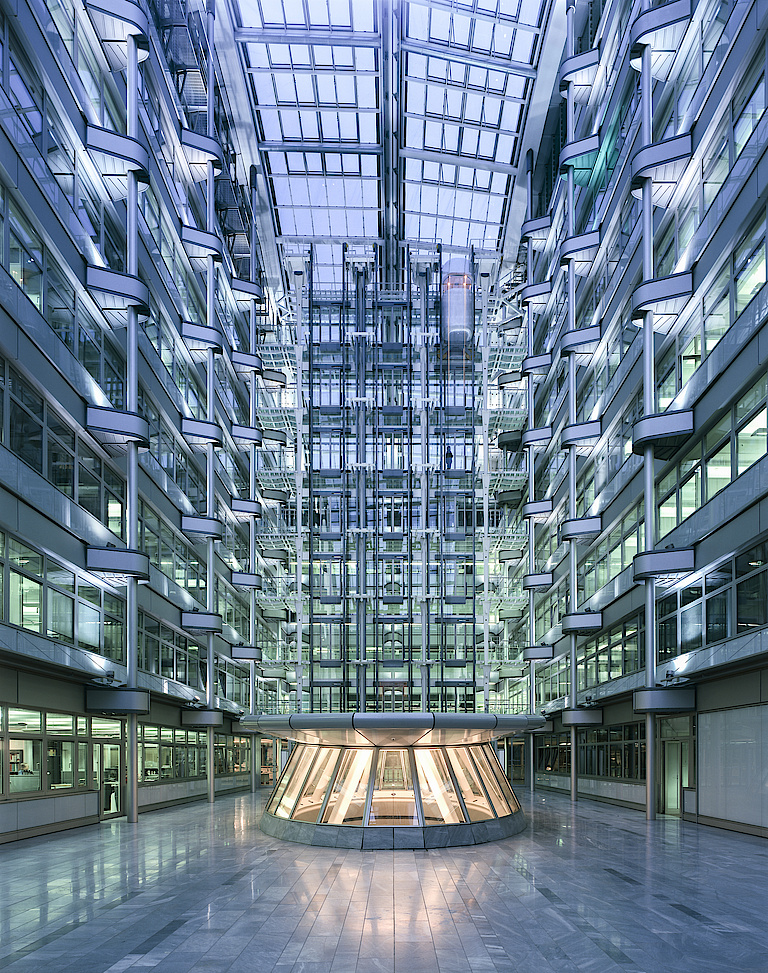 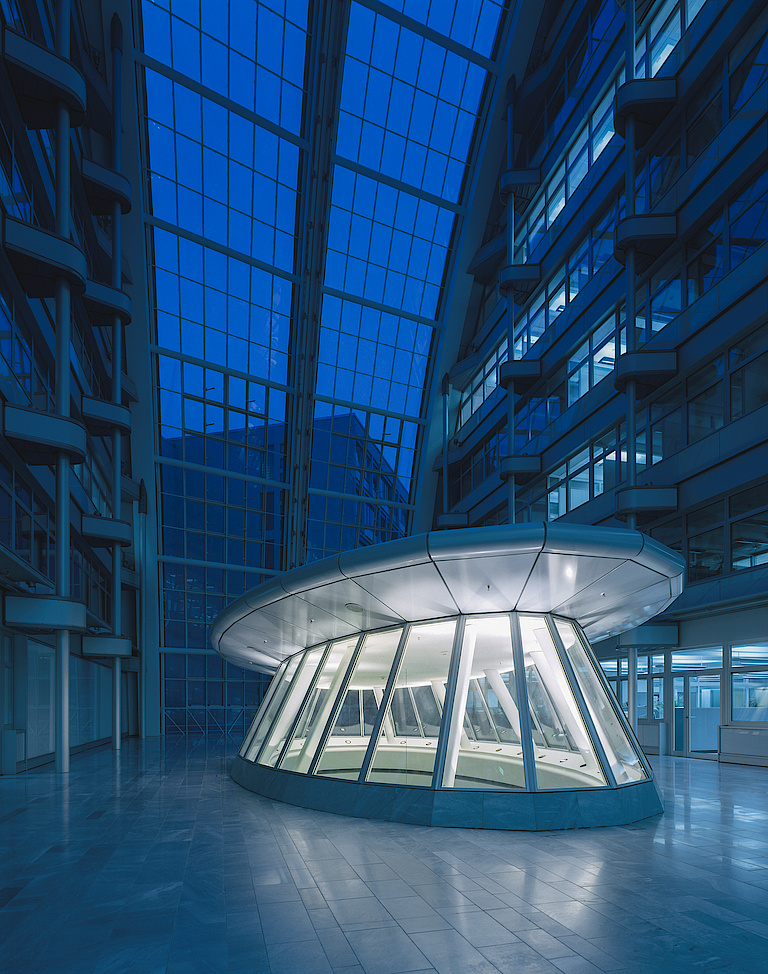 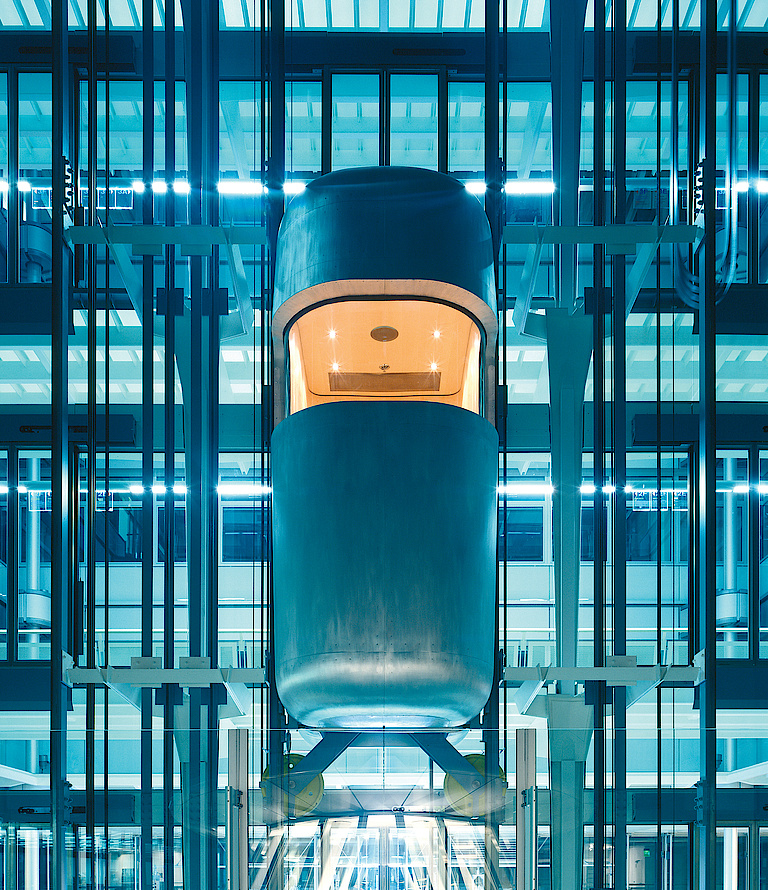 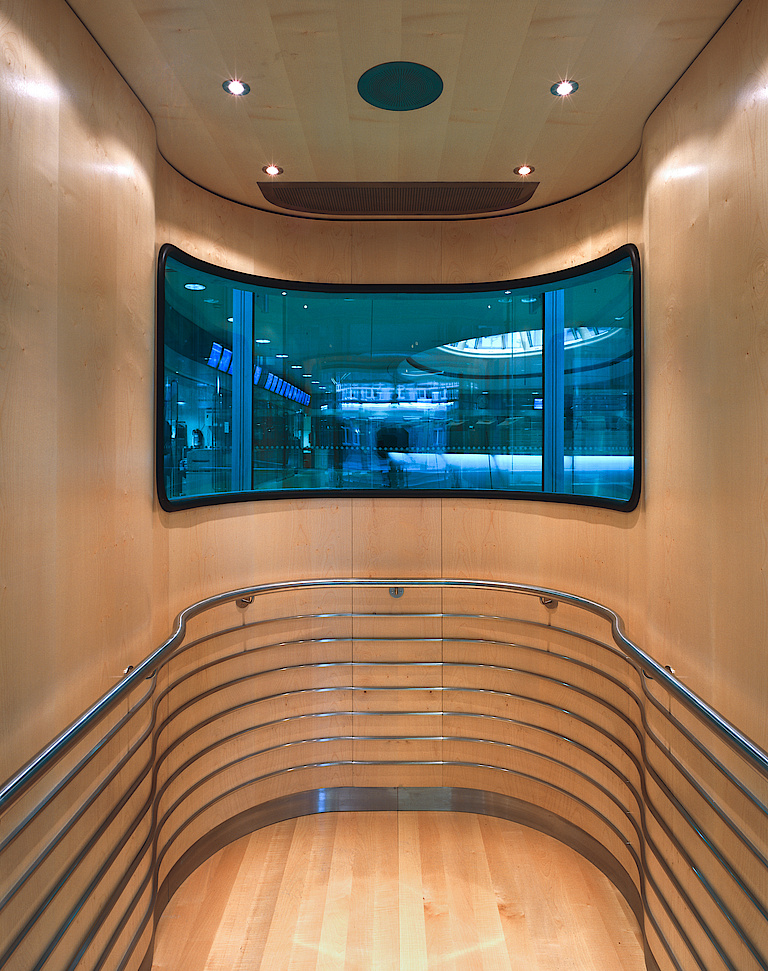 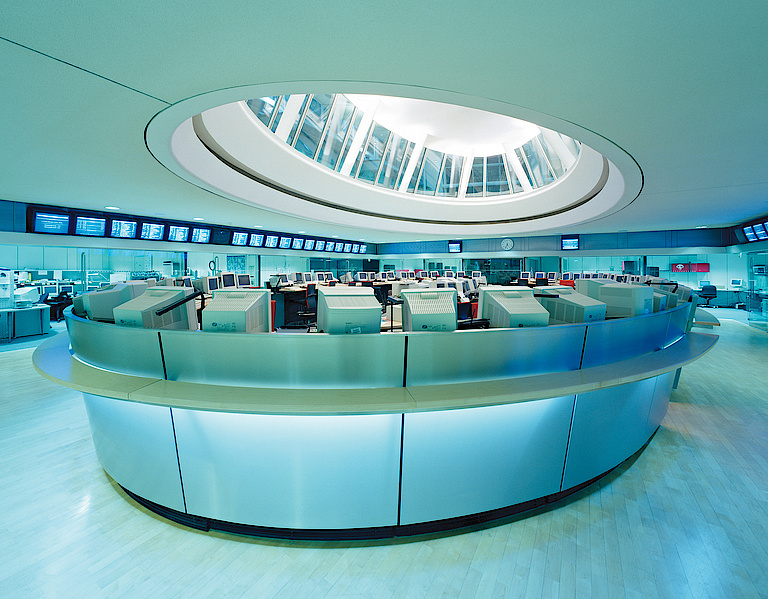 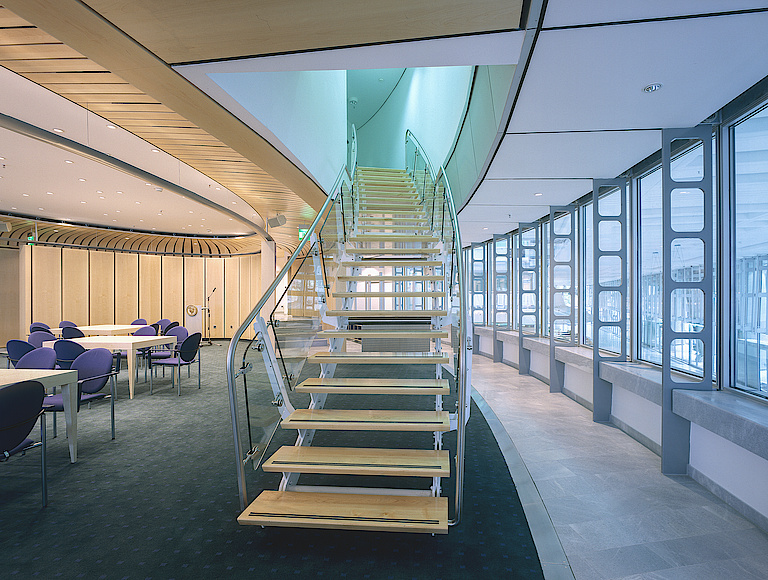 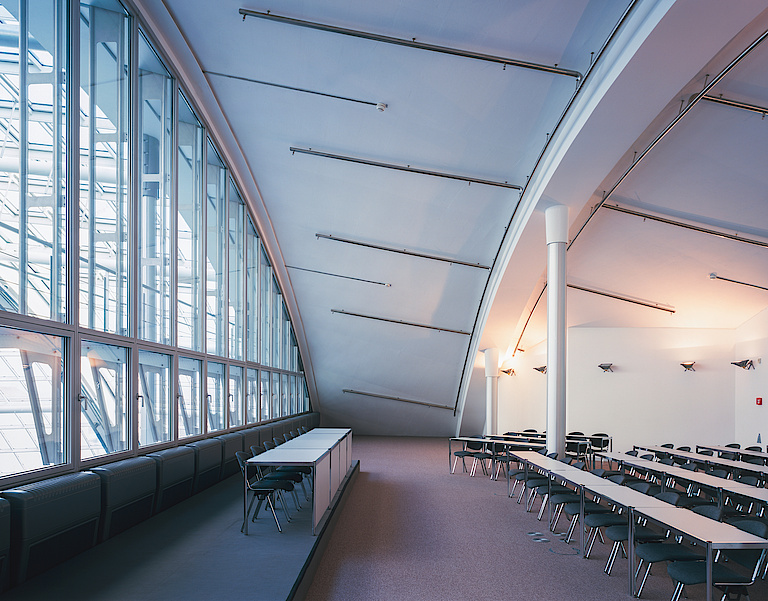 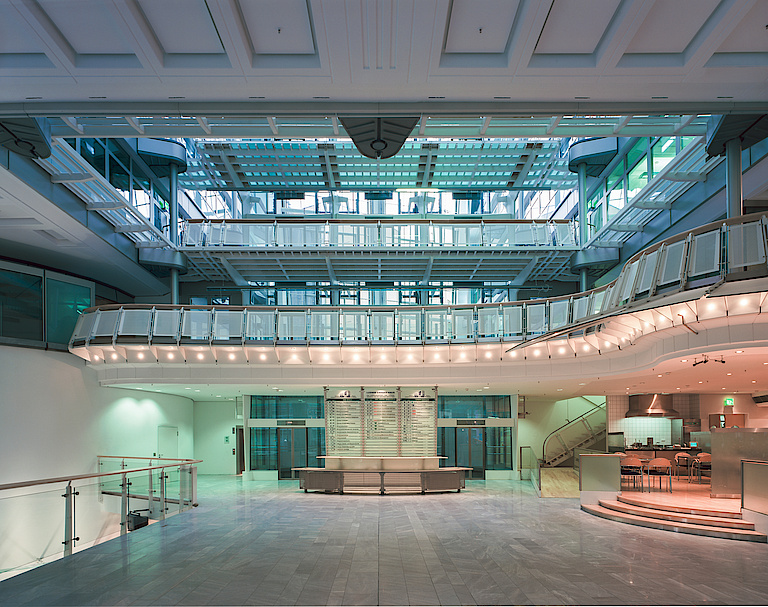 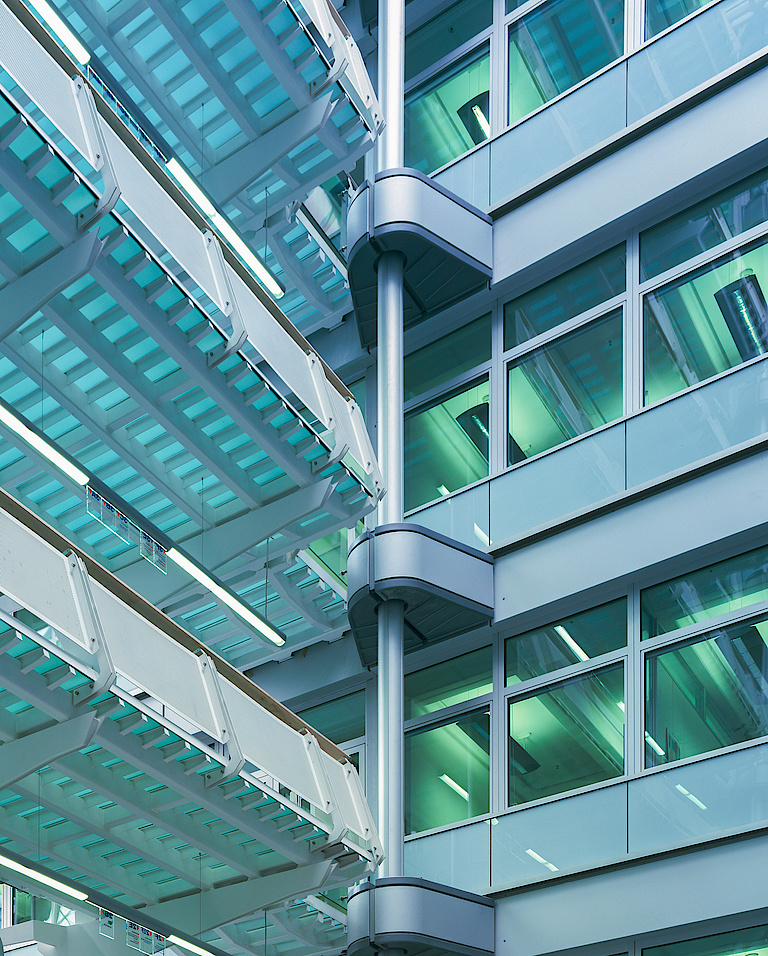 
The Ludwig Erhard Haus is a multi-purpose communication centre, designed to function as a meeting point for the principal players in the economic life of Berlin. Its unique and dramatic form, reliant on a sculptural structure of fifteen elliptical steel arches, has become a popular city landmark, representative of the city's growing prosperity and spirit of optimism.

The project was realised through a competition held by the German Chamber of Trade and Commerce. The brief was to design a quality building that could offer its tenants comfortable working conditions all year round, achieving low energy consumption with low running costs and low levels of pollutant emissions. The challenge was that the building also had to be commercially viable: capable of commanding high rental rates and built within a tightly controlled budget.

In response to the limitations imposed upon it, the design developed enormously in the years following the architectural competition. An initial two-pronged approach to the structural system, comprising a series of lean-to hoops at the rear and a separate butterfly-truss system along the street front, was abandoned after proving to be over-complex. The arched ribcage structure that was finally adopted and that has given the Ludwig Erhard Haus its nickname, The Armadillo, evolved from the lean-to hoop component of the first scheme.

Comprising fifteen steel arches of progressively differing spans, the ribcage undulates in height, capitalising on the fact that its apex is far enough removed from the street line as to be in no danger of breaking the city's 22m parapet rule. The building is nine storeys high but, as the floor plates are supported by the ribcage via a system of slender, fire-resistant steel hangars, it can accommodate vast column-free spaces. The ground floor spaces in particular are designed to be reconfigured in response to the differing requirements of the tenants.

The structure of the building is clearly expressed on the north elevation, its rhythm broken only by the volume of the conference facility that curves in a downward sweep from the ground level of the east facade to the basement level of the west.

The ground level is the main public thoroughfare. It is a large, open-plan, democratic space, designed with the ease and fluidity of people movement as a priority. Its facilities are arranged along a naturally ventilated internal promenade that runs parallel to Fasanenstrasse, the undulating contours of the built edge contrasting with the regularity of the glazed screen facing onto the street outside.

From the ground floor, people disperse either down into the basement or up to the office floors. Although structurally independent of the lower reaches of the building, these are laid out around two full height atria, which in turn allow views down into the basement: the vista down into the stock exchange from the larger of the two atriums is particularly impressive.

The atria draw natural daylight deep into the heart of the Ludwig Erhard Haus and, as a complement to this downward movement of light, also house the aesthetically dynamic aluminium-clad lifts that soar upward towards the offices, offering views over Berlin as they scale the full height of building. This creates visual parallels that are immediately accessible to visitors, aiding their movement through the many levels of this multi-functional melting pot.

The building envelope acts as a skin between the interior and the exterior, effectively maintaining different conditions between the two. The properties of individual facade components have been carefully calculated so that the ratio of glass is sufficient to allow the maximum amount of daylight into the internal areas without paying a significant penalty in terms of energy (recourse to artificial light).

On the west facade, which is pulled out from the curved ribcage and presents a regular elevation parallel to the main street, this ratio is approximately 50%. The fenestration is double-glazed and has a low emissive coating. It is protected by a series of tinted glass solar-shading louvres that can rotate to cope with low angle sun.

On the north facade, the roof extends right down to level two, supported by the 15 cast stainless-steel clawed feet of the structural arches. This means that the offices located on the northern side are clad with the same matt-finished, stainless steel skin as the roof. They are thus predominantly reliant on the atria, (the dimensions of which were determined by sophisticated solar modelling techniques), as a source of natural light.

Naturally ventilated, and thus ensuring that maximum use is made of low ambient temperatures for free cooling, the atria act as passive thermal buffers between the office space and the exterior. This reduces the energy required for office heating, minimising plant load and improving user comfort.